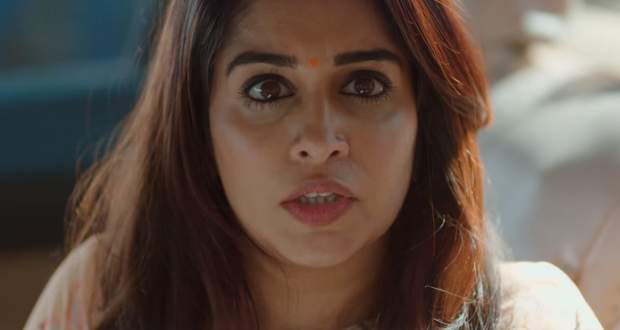 Today's Kahaan Hum Kahaan Tum 13 Jan episode starts with Sonakshi sensing someone near the gate. She is not able to find anyone but there is a man who reports to someone over the phone.

In the morning, Rohit is preparing for a high profile case. Meanwhile, Sonakshi finds the same man on her way back home. He pastes a slip on her window stating that he knows Naren’s truth.

Further, it is written that he will reveal it to everyone the next day. Later, Sonakshi talks to Veena indirectly about the affair thing using her show as a topic.

Rohit gets mad at Sonakshi for talking such things with Veena. He is further disturbed about his surgery while Sonakshi calms him down.

Tanya wants to expose Rohan in front of the whole family and show the proof to everyone. Later, Sonakshi tries to console Ajit and asks him to concentrate on his work.

Sonakshi finds the man in front of her house and also receives a letter from the same man. The man has also sent a parcel for Veena that is taken upstairs by Vimmi.

Rohit has also reached for his surgery in the hospital while Sonakshi asks from the receptionist about the parcel.

Upcoming Kahaan Hum Kahaan Tum episode update: Sonakshi makes a plan against the blackmailer while he reaches the hospital to tell Veena the truth.

© Copyright tellybest.com, 2018 & 2019. All Rights Reserved. Unauthorized use and/or duplication of this material without written permission from tellybest.com is strictly prohibited.
Cached Saved on: Saturday 6th of June 2020 11:36:47 PMCached Disp on: Saturday 4th of July 2020 05:18:35 PM