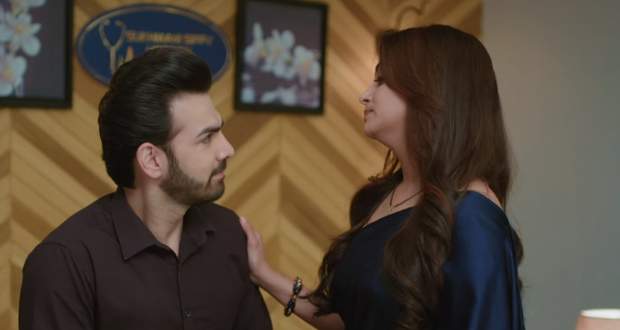 Today's Kahaan Hum Kahaan Tum 14 Jan episode starts with Sonakshi finding the parcel in Veena’s room. There is a letter in that parcel addressed to Veena stating the truth about Naren.

Sonakshi is scared of the man and decides to meet him at 8 pm. Later, Sonakshi reaches the place but with Sumit. The blackmailer learns Sonakshi is trying to double-cross.

He calls his boss and gets some instructions. Later, Sonakshi reaches the hospital and calms down the media. Rohit comes out of the OT and gives credit for his success to Sonakshi.

The blackmailer threatens to reveal the truth in front of the media and also has proof. He further asks Sonakshi for 1 crore rupees till 11 pm the next day.

Sonakshi meets Rohit and tries to hide her worries. Rohit wants to know why Sonakshi is worried while Sonakshi ignores his question.

Suman learns that one crore’s FD is being broken by Sonakshi. She gets shocked and decides to talk to Pari but she doesn’t pick up the phone as she is busy romancing with Rohan.

© Copyright tellybest.com, 2018 & 2019. All Rights Reserved. Unauthorized use and/or duplication of this material without written permission from tellybest.com is strictly prohibited.
Cached Saved on: Saturday 6th of June 2020 11:29:55 PMCached Disp on: Saturday 4th of July 2020 10:56:09 AM