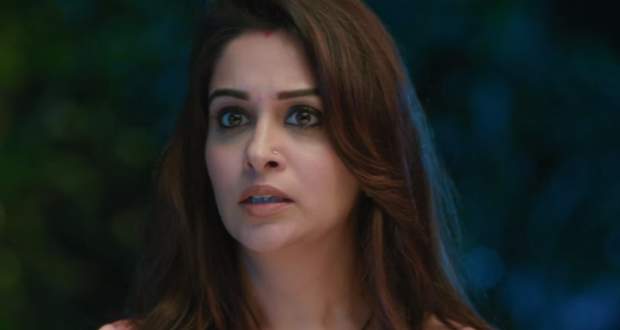 Today's Kahaan Hum Kahaan Tum 15 Jan episode starts with Sonakshi showing the newspaper cutting of the blackmailer. Rohit is sleepy and doesn’t tell her anything.

Suman asks Pari about what’s going on in the Sippy mansion. Rohan gets worried to see a spy camera box in the dustbin and starts searching for the camera.

He finds the camera in the lamp and gets a call from Tanya. Meanwhile, Sonakshi continues to ask everyone about the man in the newspaper clipping.

Rohan reveals to Sonakshi that he has seen him with Ajit. Sonakshi asks Ajit and he says that he just met him at the hospital and says he doesn’t have his number.

Sonakshi finds the same stamp on a box in Ajit’s room as was on the blackmailer’s letters. Elsewhere, Tanya wishes to keep an exhibition of her jewelry.

Suman reaches Sippy mansion to meet Sonakshi but she is not there. She accuses Veena of taking money from Sonakshi while Veena gets upset.

Suman says that Sonakshi has broken a fixed deposit of one crore. Meanwhile, Sonakshi gives the money to the blackmailer and asks him to not contact again.

The blackmailer meets Ajit who asks him to not disturb him again as their accounts are cleared. Sonakshi arrives again slaps Ajit.

Sonakshi gets upset with Ajit for blackmailing her while Ajit says he had lost money while gambling. Ajit had heard their conversation and is upset with his dad.

Sonakshi says she will not tell anything to anyone while later Rohit asks Sonakshi about one crore rupees.