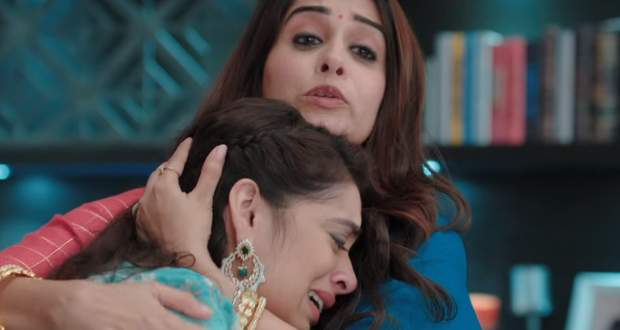 Today's Kahaan Hum Kahaan Tum 16 Jan episode starts with Rohit asking Sonakshi about one crore rupees. He further says that Suman has accused them of dowry while Sonakshi lies.

Rohit is upset that Suman has talked rudely with Veena. Meanwhile, Ajit is drunk and feels guilty while the cab driver throws Ajit out.

He gets unconscious on the road while later in the morning, Rohit ignores Sonakshi. However, they soon patch things up and Sonakshi apologizes for her mother’s behavior.

Veena is worried about Ajit and Sonakshi apologizes to her as well. Elsewhere, Ajit is at Suman’s place and learns that he told her Naren’s reality while being drunk.

Suman promises that she won’t tell anyone for Sonakshi’s reputation. At the same time, Rohit invites Suman for Tanya’s exhibition.

Tanya starts organizing the exhibition and gets a pen drive from Chachi. Aakash learns this and confronts Sonakshi about her. He reveals that Pari and Rohan are having an affair.

Tanya is watching the video of Pari and Rohan when Sonakshi arrives and tries to calm her down. She takes her upstairs while Veena watches the same footage of Rohan and Pari.

Veena gets angry and gets in a car to meet Suman. Meanwhile, Sonakshi tries to console a heartbroken Tanya. At the same time, Rohit also gets mad at Sonakshi because of her family.

© Copyright tellybest.com, 2018 & 2019. All Rights Reserved. Unauthorized use and/or duplication of this material without written permission from tellybest.com is strictly prohibited.
Cached Saved on: Sunday 5th of April 2020 03:12:28 AM