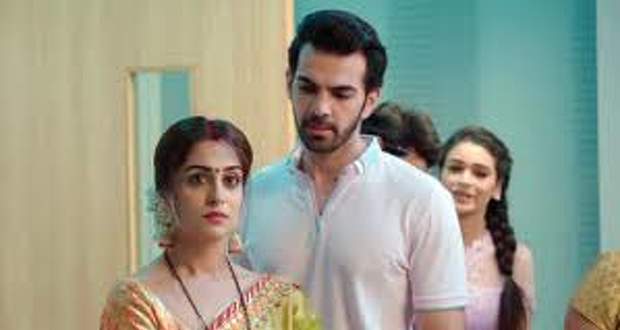 Today's Kahaan Hum Kahaan Tum 16 Jul episode starts with Rohit and Netra overhearing Sumit's talk with a boy regarding changes in the script.

Netra asks Rohit what is going in his mind. Sukhmani and Veena talk about Rohit that he gets upset on small things, and even now he is worried about Sonakshi's matter.

Sukhmani makes Veena understand that everything will be fine. Sukhmani reminisces her relation with her husband that he always took care of her and she also gets emotional while sharing but Veena cheers her up.

Rohan plans to take Tanya out for a romantic dinner, but Tanya asks him to enjoy with his friends, and she will enjoy with Deepa at home only.

Meanwhile, after shooting Sumit flirts with a girl who is playing the character of a nurse. He tells her that he will introduce her to some producers who are looking for fresh faces.

Later on, Sumit comes to know that a boy dressed up as a female nurse. Everyone at the hospital watches this scenario and laughs at Sumit.

Sumit thinks Sonakshi pulled this prank on him, and he tries to threaten her, but Rohit comes ahead and accepts that he did everything.

Rohit gives Vimi's brother wedding invitation card to Sonakshi and thinks that everything is fine between them, but Sonakshi denies and says nothing is going to be okay between them.

The next morning, Sonakshi gets happy when she sees Pari's photo on the front page of the newspaper and shares the news with her family.

On the other hand, Sumit decides to seek revenge from Rohit and Sonakshi. Sumit gets a call for becoming a part of the judging panel of Pari's contest, and he agrees.

© Copyright tellybest.com, 2018 & 2019. All Rights Reserved. Unauthorized use and/or duplication of this material without written permission from tellybest.com is strictly prohibited.
Cached Saved on: Friday 31st of January 2020 01:54:25 PMCached Disp on: Wednesday 19th of February 2020 12:04:13 AM