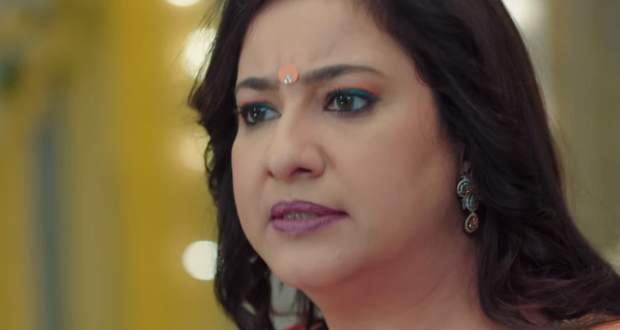 Today's Kahaan Hum Kahaan Tum 17 Jan episode starts with Rohit getting mad at Sonakshi about his family causing trouble for his family. Rohit says nobody listens to Sonakshi and Pari is shameless.

Sonakshi wants Rohit to understand that it is Rohan’s fault as well. Rohit is not ready to listen and feels guilty for getting married to him.

Rohit wants to meet Pari while Sonakshi stops him. He continues to accuse Pari while Rohit gets in the car without listening to Sonakshi. Sonakshi gets in a car with him.

Meanwhile, Suman reaches the Rastogi house and slaps Pari. She accuses her of being shameless and getting involved with a married men.

Pari accuses Rohan of having affair with various girls and insults Veena’s upbringing. Sonakshi reaches at the same time and slaps Pari for insulting Veena.

Pari asks Rohan to come home and accuses his mother while Veena declares that Pari and Suman will not be allowed in Sippy mansion.

Suman finds Rohan and Pari hugging while later the exhibition of Tanya’s jewelry starts. At the same time, Suman arrives clapping while Sonakshi doesn’t want her to be there.

She creates a scene in front of the guests and later reveals the shocking truth of Naren’s extramarital affair and Pooja being his illegitimate daughter.

Veena is not ready to believe Suman while Suman makes Rohit swear on Sonakshi and reveal the truth.

© Copyright tellybest.com, 2018 & 2019. All Rights Reserved. Unauthorized use and/or duplication of this material without written permission from tellybest.com is strictly prohibited.
Cached Saved on: Thursday 30th of January 2020 04:22:37 PMCached Disp on: Monday 17th of February 2020 01:30:15 PM