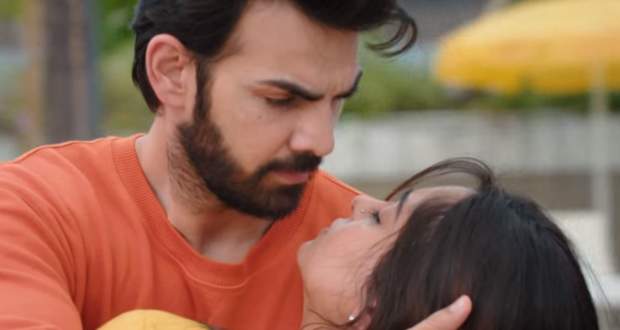 Today's Kahaan Hum Kahaan Tum 18 Feb episode starts with Aakash asking Nishi to relax and tells her that Sonakshi was congratulating. Nishi tries to instigate them against the Rastogis.

At the same time, they receive a parcel from Rastogis in which a cactus plant is present. Nishi gets successful in enticing Deepa and Aakash against Sonakshi.

Sonakshi meets the producer of the film who spikes her coffee and leaves to make a call. Meanwhile, Rohit learns that Pari is giving birth to the child to take revenge.

Rohit asks the doctor to ask Pari to meet her at a hotel coffee shop. He wants to confront her in the same hotel. Elsewhere, Sonakshi feels dizzy and the producer asks Sonakshi to come along with him in a room.

Rohan wants to abort the child in Pari’s womb. Later, Sonakshi frees herself from the producer’s hold and removes his wig. She starts shouting and exposes him in front of all the people.

She further reveals that he spiked her coffee and wants to take advantage of her. The other girls also insult the producer and follow him outside. At the same time, Rohit arrives at the coffee shop and learns Sonakshi was there.

Later, Rohit saves Sonakshi from falling into the swimming pool. Meanwhile, Rohan instructs his friend Rahul to keep an eye on Pari.

Sonakshi gains consciousness and is unable to recognize Rohit. Sonakshi tells him he is looking like Pradeep Kumar actor. She later says he looks like her husband.