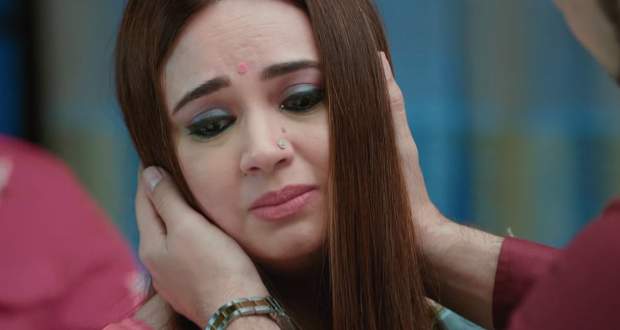 Today's Kahaan Hum Kahaan Tum 20 Jan episode starts with Suman asking Rohit if she is lying. Suman further reveals that YK, Nishi, and Rohit knew from the start about the truth.

She also shows the blood sample report when Naren gave blood to Pooja. Veena is stunned to know the reality while Rohit accuses Sonakshi of telling her mother the truth.

Veena gets unconscious while Rohit doesn’t let Naren touch her. Veena starts having seizers and Rohit puts his hand in her mouth so that she doesn’t bite her tongue.

Rohit gives her an injection to make her sleep for a while. Later, Rohit gets mad at Sonakshi for telling Suman the truth.

Sonakshi tries to prove she has not told Suman anything. She decides to find out who told Suman the truth while Rohit refuses to talk to her.

Sonakshi reaches Rastogi house to ask her who told her the truth. Suman refuses to help her and asks her to leave. Later, Ajit apologizes to Sonakshi for telling Suman the truth.

He requests Sonakshi to not tell Rohit as he will throw him out of the house. Elsewhere, Veena is not in her senses and reacts as if nothing has happened.

Rohit slaps Veena to get her in senses. Veena is heartbroken after learning the truth and is mad at Rohit more than Naren. She asks everyone to leave and doesn’t want to see Rohit’s face. Rohit is also shattered and locks himself inside the room.

Upcoming Kahaan Hum Kahaan Tum episode update: Sonakshi saves Ajit and takes the blame on herself in front of Rohit.

© Copyright tellybest.com, 2018 & 2019. All Rights Reserved. Unauthorized use and/or duplication of this material without written permission from tellybest.com is strictly prohibited.
Cached Saved on: Monday 30th of March 2020 07:26:45 PM