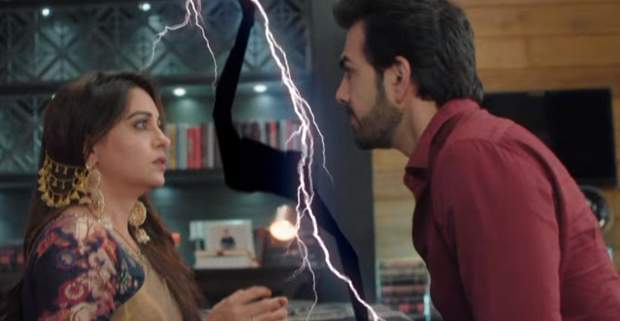 Today's Kahaan Hum Kahaan Tum 21 Jan episode starts with Sonakshi asking Rohit to open the door. She enters the room and tries to calm him down. Rohit is shattered with Veena’s hurtful words.

Rohit recalls everything and asks Sonakshi who told Suman about Naren’s truth. Ajit is outside their room begging Sonakshi. Sonakshi protects Ajit and takes the blame on herself.

Sonakshi apologizes but Rohit declares that he hates her. Rohit further is heartbroken as she broke his trust. Meanwhile, Rohan is worried about Pari as she is not picking up his phone.

Rohan declares that he loves Pari and asks Tanya to show the clip. He is happy that she has learned the truth and doesn’t want to stay with her.

Later, Sonakshi finds Rohit in the drunken state who asks her to drink with him. Rohit praises Sonakshi for her beauty and shares his first-time experience seeing Sonakshi.

Rohit says he supported her at every point and trusted her. He creates a scene and is not in his senses. He falls on the glass and Sonakshi and Ajit take him to the room.

Naren apologizes to Veena and asks for forgiveness. Veena doesn’t answer him and later thanks Sonakshi for opening her eyes. Later, Pooja wants to talk to Sonakshi while Nishi is mad at Sonakshi.

Nishi reveals that she doesn’t care about Pooja and she is just a pawn to get want she wants in her life.