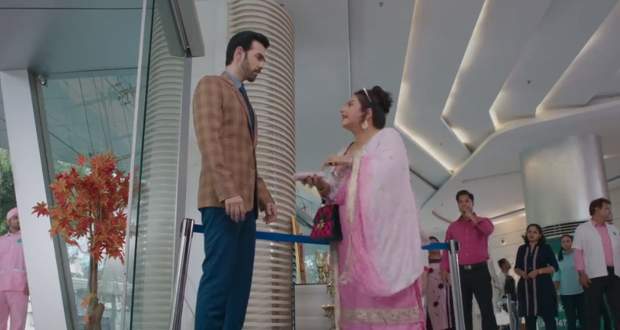 Ajit calls Rohit to tell their mom and dad are back. Rohit gets frustrated to learn it will take him 2 hours to reach home.

Suman comes to Nishi’s clinic and finds it really weird that Nishi is talking nicely to her.

Nishi asks Suman to reduce the rate for inauguration indirectly and states Sonakshi will also get benefited with the inauguration.

They both agree on an amountof Rs. 6.5 Lakhs.

Sumit reads something in the script and tells the crew that he will do the scene with Sonakshi.

Rohit comes home and reunites with his family.

Everybody starts talking about Rohit’s marriage.

In living room, everybody starts discussing about the wedding they all attended in London.

Rohit is not aware that Sonakshi is the chief guest.

Suman lies to Sonakshi that she has not charged anything for inauguration of the hospital OT.

Sonakshi comes to know that Sumit wants to do romantic scene with her.

Rohit can’t find his expensive watch at home but Sumit finds it on the set.

Rohit reaches hospital and clashes with Suman which results in breaking of Suman’s phone.

Suman asks for damage amount for her phone in cash. Rohit says he will handle everything.

Suman comes to know Rohit is the nephew of Nishi.

Nishi watches Suman counting money, and Suman tells her she has received seventy five thousand for her phone damage.

Sonakshi gets the romantic scene changed. Sumit gets disappointed.