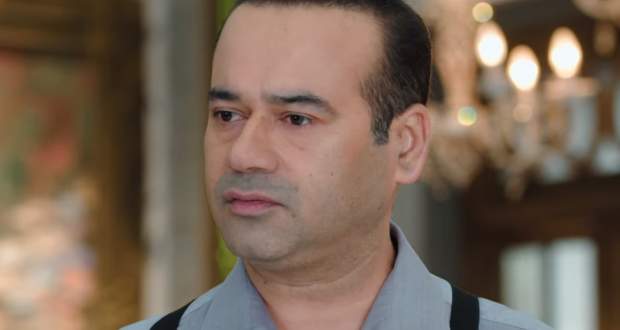 Today's Kahaan Hum Kahaan Tum 22 Jan episode starts with Suman starts searching a groom for Pari. At the same time, the police arrive to arrest Pari while Suman gets shocked to see the complaint papers.

Sonakshi receives divorce papers for Veena and Naren asked by Rohit. Sonakshi is not happy with Rohit’s decision while Rohit doesn’t want his mother to stay unhappy.

Rohit tries to explain her using their example while Sonakshi wants Veena to take the decision. Rohit is still not ready to listen to her and is confident about his decision.

Rohan wants Tanya to take her complaint back while Tanya is not ready to accept his demand. Meanwhile, Rohit gives divorce papers to Veena while some woman activists create a scene against Naren in front of the Sippy mansion.

They want to put black paint on Naren while Sonakshi stops them. Veena arrives with a gun and asks the activists to leave as it is her personal matter.

Veena also declares that they will continue to support Pooja and also says nobody can break their bond. Naren thinks Veena has forgiven him while Veena did it to save family reputation.

Sonakshi thinks Veena will give chance to Naren while Rohit says he will not give any chance. Meanwhile, Rohan wants to talk to Pari while Suman refuses to accept their relation.

Suman asks Rohan to give a divorce to Tanya if he actually loves Pari. Later, Naren calls everyone to reveal his decision and has also called Daadi.

Naren has decided to give all of his property to Veena and Pooja. Nishi is upset with the declaration while Tanya gets mad at Rohan for getting Pari out of jail.

© Copyright tellybest.com, 2018 & 2019. All Rights Reserved. Unauthorized use and/or duplication of this material without written permission from tellybest.com is strictly prohibited.
Cached Saved on: Sunday 5th of April 2020 10:00:45 AM