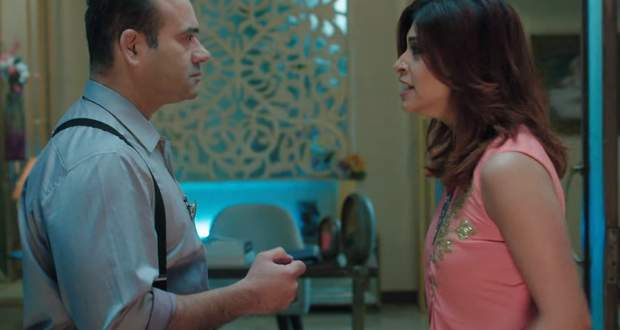 Today's Kahaan Hum Kahaan Tum 23 Jan episode starts with Sonakshi trying to talk to Suman while she ignores her. Later, she learns that Aakash is upset with Naren giving property to Veena and Pooja.

Meanwhile, Rohit is watching the video of their marriage while Sonakshi comes at the same time. She is asked to wait by Rohit while he attends the meetings.

Elsewhere, Rohan wants to leave the house while Tanya threatens to put charges on him. She also threatens to claim a huge amount of money.

Sonakshi confronts Rohit and says Naren is doing wrong by giving whole property to Pooja and Veena. Rohit is not ready to listen to Sonakshi and asks her to leave.

Later, Sonakshi also talks to Naren and points his mistake. She wants him to think before taking such a huge decision. Elsewhere, Rohit learns that the woman activist is an actress.

She accuses Sonakshi of giving them money and sending them to create drama. Meanwhile, Nishi wants to claim everything from Naren as she accepted Pooja for an investment.

Rohit blames Sonakshi for sending the actress at their home while Sonakshi wanted to prove her point. Rohit gets even more upset with her.

Naren wishes to tell Nishi’s reality to Rohit while Nishi pushes Naren off the balcony to take over the property. Nishi decides to blame Sonakshi for the murder.

© Copyright tellybest.com, 2018 & 2019. All Rights Reserved. Unauthorized use and/or duplication of this material without written permission from tellybest.com is strictly prohibited.
Cached Saved on: Thursday 2nd of April 2020 06:20:37 AM