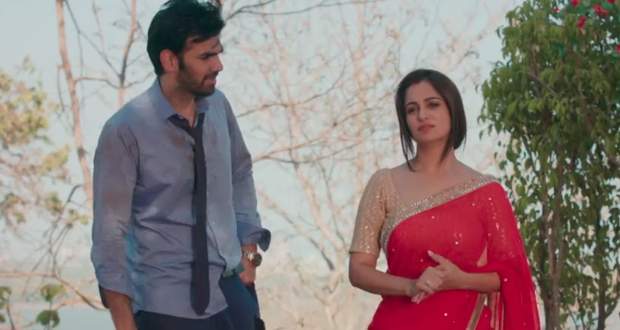 Sonakshi asks the dog if it is alright.

The owners of the dog come and ask Rohit to take their picture with Sonakshi (Parvati).

Rohit tells Sonakshi the story of how he got stuck with the dog.

Rohit tells Sonakshi that he comes here when he want to spend some time alone.

Rohit says to Sonakshi she could have saved him alone, why she needed help?

Rohit teases Sonakshi when she can’t get the car started.

Sonakshi prays and car gets started.

Rohit asks Sonakshi for lift in her car.

Suman tells her younger daughter how she got 50 thousands out of Nishi and family.

In the car, Rohit and Sonakshi start chatting.

Rohit tells Sonakshi he can’t drive and Sonakshi says that he should learn driving.

Later, they come across a checkpoint. Sonakshi says she doesn’t have a licence.

The inspector recognises Parvati and says they don’t need to see her licence.

Rohit says he can’t go with someone who doesn’t have a licence.

Meanwhile, Netra is informed that Sumit has talked to some politician and there will be some strike tomorrow in front of studio.

© Copyright tellybest.com, 2018 & 2019. All Rights Reserved. Unauthorized use and/or duplication of this material without written permission from tellybest.com is strictly prohibited.
Cached Saved on: Saturday 18th of January 2020 03:44:30 AMCached Disp on: Wednesday 22nd of January 2020 07:10:16 AM