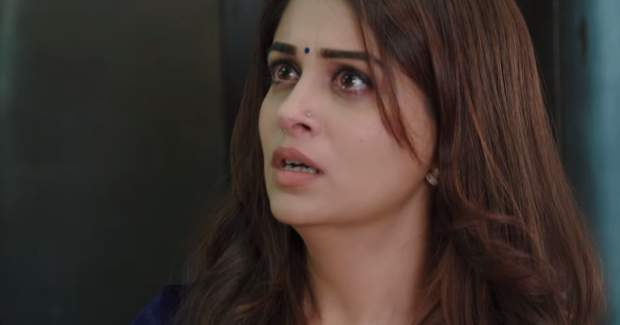 Today's Kahaan Hum Kahaan Tum 29 Jan episode starts with Sonakshi discussing her family matter with Sumit. Sumit is shocked and wants her to tell Rohit about everything.

Netra wants Sonakshi to attend a party for 1200 episodes of Kahaani Parvati Ki. Later, Sonakshi gets worried about Rohit and reaches their secret spot.

Rohit is mad at Sonakshi and refuses to talk to her. She is about to fall off the cliff when Rohit catches her and saves her life.

Sonakshi asks if he doesn’t trust her while Rohit takes the friendship band from her. At home, Rohit starts throwing Sonakshi’s clothes from the cupboard.

Rohit asks for a divorce and thinks their relationship is already dead. Sonakshi gets ready to give the divorce and asks for 80 percent property of the Sippy’s in return.

Rohit promises to make her life hell in the house while Sonakshi accepts his challenge. Later, YK trusts Sonakshi and doesn’t know why Rohit is acting so rude.

YK wonders why Sonakshi is bearing all the humiliation while Sonakshi explains how Rohit can’t lose his trust in second chances and love.

Rohit doesn’t give any time slot to Sonakshi to be with Naren. Sonakshi asks Ajit to check Rohit’s fever but Rohit gets to know of their plan. Sonakshi plays a trick and checks Rohit’s fever.

Upcoming Kahaan Hum Kahaan Tum episode update: Rohit declares in Sonakshi’s party that there is no Parvati like wife in real life.