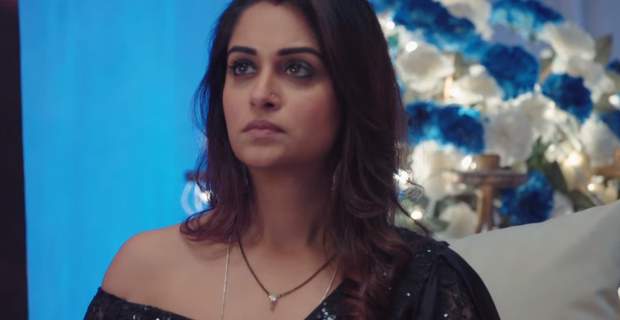 Today's Kahaan Hum Kahaan Tum 30 Jan episode starts with Sonakshi checking Rohit’s fever. Later, she decides to use Rohit’s fever to get Veena and Rohit to talk. Sonakshi’s plan gets successful as Rohit drinks the milk given by her.

Sonakshi gets happy as she knows there was medicine mixed in the water. Meanwhile, Suman introduces Pari to a guy and asks her to go on a date with him.

Veena’s friends console her and later talk ill behind her back. Rohit rebukes them while Nishi also supports him. Veena overhears this and gets upset.

Nishi entices Rohit against Sonakshi and that she has destroyed their family. At the same time, Netra arrives in Rohit’s office to invite him to the auction.

Rohit decides to attend the function to make fun of Sonakshi. Later, Sonakshi attends the function and gives an interview. The channel also declares that they are not accepting her resignation.

One interviewer asks about Sonakshi’s family's absence while at the same time, Rohit arrives. Later, the bidding for Parvati’s clothes and accessories start and Rohit bids 10 lakhs for her outfit.

Rohit later mocks Sonakshi and makes fun of her character. He asks her to get dressed as Parvati while later the inspector comes to meet her.

The inspector shows her the footage of Naren falling off the balcony. They also reveal that the person who pushed Naren is left-handed.

Upcoming Kahaan Hum Kahaan Tum episode update: The inspector reveals that someone has done forged signatures on the prenuptial agreement.