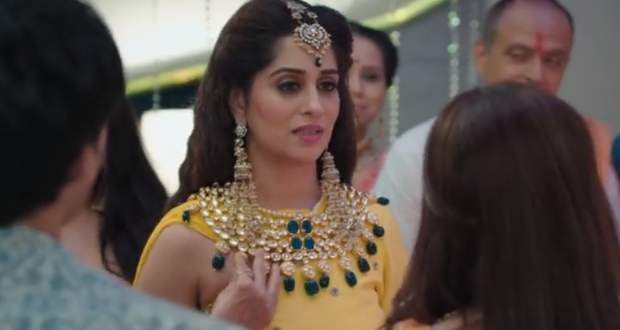 Suman Rastogi is in a bad mood and is upset about Sonakshi and Rohit’s relationship. Pari calls Rohan and finds out that Sonakshi has agreed to marry Rohit.

Suman decides to go to Sippy house to confront Sonakshi. At Sippy house, everybody praises the decorations except Rohit who thinks it is too loud.

Rohit gets awestruck to see Sonakshi’s beautiful look. He denies to wear what Sonakshi wants but Sonakshi is also adamant to make him wear her chosen outfit.

She goes into his room and hides his clothes. At the same time, Rohit comes out of the washroom and starts dancing in a towel.

Sonakshi sees Rohit without clothes and gets embarrassed. Later, Rohit arrives in the party wearing an outfit chosen by Sonakshi but ignores her.

Nishi gets angry when her mother-in-law ignores her and talks to Sonakshi instead. Rohit and other Sippy boys perform on Sonakshi’s challenge.

Sippy’s and Sonakshi celebrate Janmashtmi while Suman Rastogi and police are on their way to Sippy mansion.

Rohit decides to go to the hospital and is unaware that the patient he is going to treat is Rhiama. Sonakshi wishes to leave but before that Veena gives the family necklace to Sonakshi.

At the same time, Suman comes and creates a scene. Meanwhile, Ajit also calls Rohit to inform about Suman’s arrival.

Suman later says that she knew everything about Sonakshi’s relationship. She confronts Nishi in front of everyone about scarring her.

Veena is about to tell something when the police arrive to take Sonakshi for questioning.

Upcoming Kahaan Hum Kahaan Tum episode update: Rohit assures Sonakshi that he will help her while Sonakshi tells police she went to Pune because of Pooja Sippy.