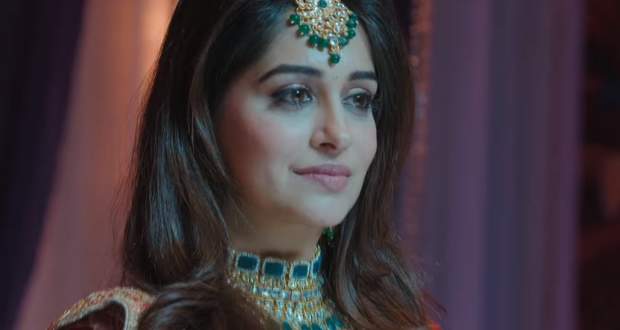 Today's Kahaan Hum Kahaan Tum 31 Jan episode starts with Inspector asking Sonakshi to help them find the culprit. He further says that they will soon get the reports of the prenuptial agreement.

Meanwhile, Pari finds Rohan and Tanya in the same restaurant where she has come on a date with Viren. She gets upset with Viren’s question and throws water at him. She also gets unwell.

Elsewhere, Sonakshi arrives in her Parvati avatar while the audience cheers for her. Rohit arrives on the stage and starts mocking her.

He calls her fake and says Sonakshi is nothing like Parvati in real life. Sonakshi tries to handle the situation by lying about playing a game with Rohit.

Later, Sonakshi learns that her signatures are forged by some lefthander. The inspector states that whoever tried to kill Naren has forged her signatures.

Elsewhere, Pari learns that she is pregnant and gets upset. Later, Sonakshi tries to get Rohit in his senses by making him stand under the shower.

They share some romantic and sizzling moments in the shower while later Rohit remembers his father’s accident. He accuses her of being fake while Sonakshi reveals that someone is playing a game in the house.

In the morning, Sonakshi tries to find out the culprit by observing each and every member of the family. Sonakshi observes that only Nishi uses the left hand in the family.

© Copyright tellybest.com, 2018 & 2019. All Rights Reserved. Unauthorized use and/or duplication of this material without written permission from tellybest.com is strictly prohibited.
Cached Saved on: Thursday 2nd of April 2020 06:12:44 AM