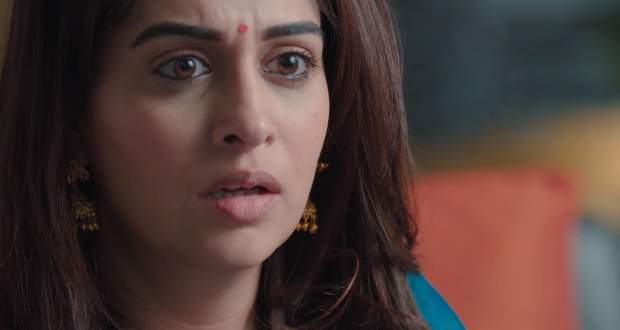 Suman gets mad at Pari for insulting Viren while later Pari decides to get Rohan in her life with the help of her child. Meanwhile, Sonakshi tells the inspector that no one in her family is left-handed.

She finds Vimmi using her left-handed and interrogates her. She later confesses that someone is trying to ploy against her in the family.

Sonakshi realizes that someone must have practiced before copying her signature. They decide to check the dry garbage to find a clue.

YK reveals that Nishi can use both left and right hand to do chores. Meanwhile, Rohit gets mad listening to Sonakshi’s name and learns that Preeti is not well.

Sonakshi finds small papers from Nishi’s room’s garbage with her signature on them. She tries to join the paper and gets shocked to see Nishi’s name written on the paper.

Rohit tries to call Sonakshi as Preeti wants to meet her. However, Sonakshi doesn’t pick his call as she is busy searching for a clue in Nishi’s room.

She finds the same letter pad in her room. She also finds the pen with which Nishi has forged her signature. YK finds her in his room but Sonakshi makes some excuses.

Sonakshi shows the proofs to the inspector while he suggests that YK can also be the culprit. Later, Nishi finds her pen on the table and gets stunned. YK tells Nishi that Sonakshi came into their room.

© Copyright tellybest.com, 2018 & 2019. All Rights Reserved. Unauthorized use and/or duplication of this material without written permission from tellybest.com is strictly prohibited.
Cached Saved on: Wednesday 8th of April 2020 08:56:38 PM