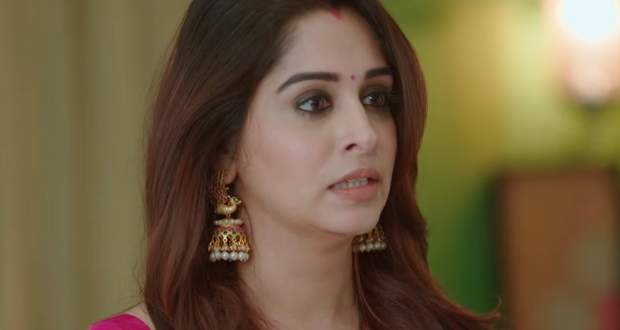 Today's Kahaan Hum Kahaan Tum 3 Jan episode starts with Rani shouting on her phone and Sonakshi arriving in her room. Sonakshi gives the letter to Rani and enquires about her worried state.

Rani lies about the papers while Sonakshi is still suspicious. Later in the morning, Nishi learns that Pooja has left with a note at the reception.

She has left with Rani and has also left her phone. Rohit says he will handle everything and calls Rani. Rani wants the money first before sending Pooja home.

Rohit asks Rani to send Pooja and meet him at the hospital. Later, Sonakshi reaches Rani’s house and learns that Rani’s daughter is Sitaara.

She further learns that Sitaara is returning from jail after a year. Sonakshi blames herself for Rani’s entry in their lives while Rani meets Rohit.

Rohit refuses to give her money while Rani blackmails him. He wants her to think about Sitaara before calling Sonakshi. Rani’s daughter is with him and asks her to do her work for 10 lakhs.

He further threatens to send her daughter in jail for the whole life. Meanwhile, Suman enquires from Netra about a new contract while Netra wants her to talk in front of Sonakshi.

Later, Rani agrees to do her job in front of YK and Nishi while Sonakshi arrives at the same time. Sonakshi reveals that she knows about Rani’s second daughter Sitaara in jail.

© Copyright tellybest.com, 2018 & 2019. All Rights Reserved. Unauthorized use and/or duplication of this material without written permission from tellybest.com is strictly prohibited.
Cached Saved on: Tuesday 25th of February 2020 01:56:48 AM