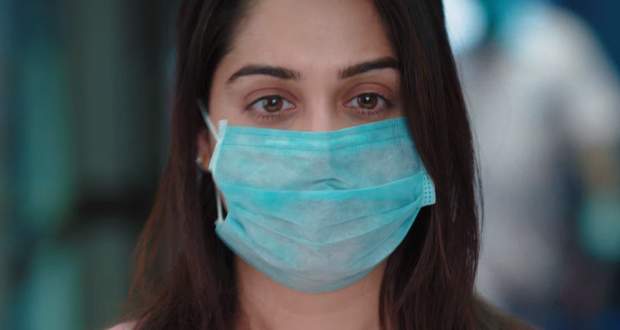 Today's Kahaan Hum Kahaan Tum 3 Mar episode starts with Rohit declaring that only Sonakshi can save him. He asks Veena to request her to save him. Meanwhile, Naren tries to get up of the wheelchair.

He falls off the stairs and Tanya witnesses this. She recalls her similar incident and realizes that she is not pregnant anymore while Rohan asks for her help.

Veena asks Nishi to bring Sonakshi in the hospital as she can save Rohit. Nishi confronts Sonakshi and reveals that her blood group can be used to save Rohit.

Sonakshi asks her to take her to the hospital to save her Rohit. She calls Nishi an animal while Nishi slaps her. Nishi also asks Sonakshi to fulfill her demand first.

Nishi brings Sonakshi to the hospital while Veena requests her to save Rohit. Sonakshi is upset with them for insulting her and now requesting to save their Rohit.

She suggests that she is classless and her dirty blood should not be injected in Rohit. Sonakshi says she will risk her life to save all patients.

She also puts a condition that Sippys will give large compensation to her family if anything happens to her. Sonakshi is showing her selfish side on Nishi’s demand.

Sonakshi doesn’t tell Sumit who kidnapped her. Meanwhile, the doctor asks Rohan to take care of Naren. Further, Tanya cries as she realizes that they lost their baby.

Rohan is not able to tell Tanya that she can’t be a mother again. Elsewhere, Sonakshi gets ready for the preparation of antidote but wishes to see Rohit once.

Upcoming Kahaan Hum Kahaan Tum episode update: Nishi asks to give the antidote to Rohit herself but intentionally doesn’t inject it.

© Copyright tellybest.com, 2018 & 2019. All Rights Reserved. Unauthorized use and/or duplication of this material without written permission from tellybest.com is strictly prohibited.
Cached Saved on: Sunday 5th of April 2020 08:52:08 AM