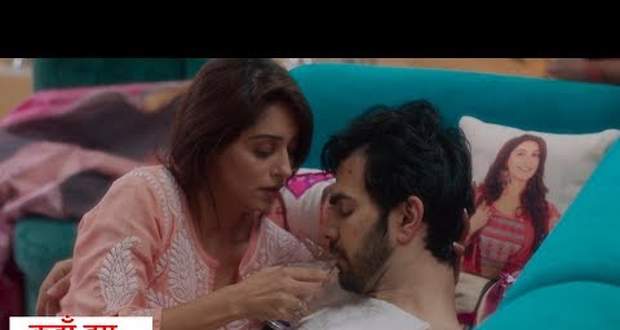 Today's Kahaan Hum Kahaan Tum 4 Jul episode starts with Netra saying to Sonakshi that Dr. Rohit is mad, maybe that watch is important for him.

On the other side, Rohit lays on the garden's bench. Sonakshi asks the maid to give blanket and mosquito repellent to him.

In the middle of the night, Sonakshi wakes up and look from the window that Rohit is sleeping while covering himself with a blanket which has Sonakshi picture on it.

She captures him on her mobile.

In the morning, when Rohit wakes up, he buys a newspaper and reads that Sonakshi who is playing the character of Parvati visits Sukhmani Hospital to meet her fan, but the hospital's doctor misbehaved with her.

After reading this headline, he gets angry and goes to Sonakshi's place and call her to see the front-page news.

Rohit says very mean words to Sonakshi and ask her why she uses Preeti for the publicity.

Meanwhile, Rohit feels dizzy and gets fainted. Pulkit sees this and moves ahead to hold him. Sonakshi also comes to help him and finds that he is burning with fever.

Sonakshi asks Pulkit to bring thermometer and herself try to call the doctor, but the doctor's phone gets engaged, and she checked Rohit’s temperature and told everyone that it is very high whereas Suman feels irritated due to Rohit as they have to return money if he creates drama.

Maid suggested to remove Rohit’s T-shirt and place a wet cloth on his forehead and chest, which will help in reducing the fever. Sonakshi & Pulkit removes his T-shirt. Sonakshi asks the maid to make Kada for Rohit. When Rohit wakes up, he looks for his T-shirt and Suman says that Sonakshi has removed his fever and T-shirt.

The doorbell rings and Sonakshi finds Ankita (along with tv show team) at the doorstep. She asks them to give her five minutes. She says to Suman that the team wants to have a day out with her, but the team should not get to know that Rohit is at her place. Suman asks Pulkit for hiding Rohit in Sonakshi's Room. Sonakshi greets everyone and introduces with Suman, Munya, and Rohit. Ankita starts covering different parts of Sonakshi's home.

© Copyright tellybest.com, 2018 & 2019. All Rights Reserved. Unauthorized use and/or duplication of this material without written permission from tellybest.com is strictly prohibited.
Cached Saved on: Sunday 19th of January 2020 12:36:51 PMCached Disp on: Wednesday 22nd of January 2020 08:47:32 AM