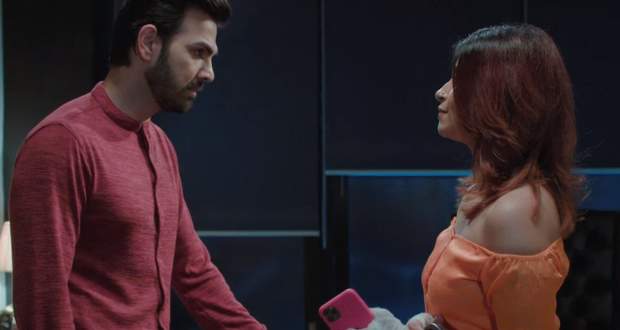 Today's Kahaan Hum Kahaan Tum 7 Feb episode starts with Rohit feeling disappointed in Nishi. Nishi shows her true face in front of Rohit while he is adamant to expose her.

At the same time, the doctor informs Rohit that Naren’s condition is getting worse. Rohit tries to handle the situation while Nishi controls Naren’s pacemaker in her phone.

She first stops the heartbeat and then brings it back to normal. Later, Nishi reveals in front of Rohit that she has hacked Naren’s pacemaker and can control his heartbeat.

She threatens to kill Naren if Rohit doesn’t follow her instructions. She wants him to hide her truth and throw Sonakshi out of his life and house.

She further threatens to harm Sonakshi as well. Rohit gets a call from Sonakshi who apologizes to him for hiding Ajit’s truth. Rohit gets disturbed while Deepa gives the divorce papers to Veena.

Veena gives the divorce papers to Rohit and asks him to throw Sonakshi out of Sippy mansion. Rohit tries to make Veena understand that Sonakshi is part of their life and tries to tell Veena.

However, Nishi arrives and Rohit restricts himself. Rohit doesn’t read the papers and signs them. Later, Sonakshi thinks that Rohit wants to prove her innocence in front of the whole family.

The family members start blaming Sonakshi while Rohit hands her the divorce papers.

Upcoming Kahaan Hum Kahaan Tum episode update: Sonakshi gets upset to learn that Rohit is giving her divorce on the basis of infertility.