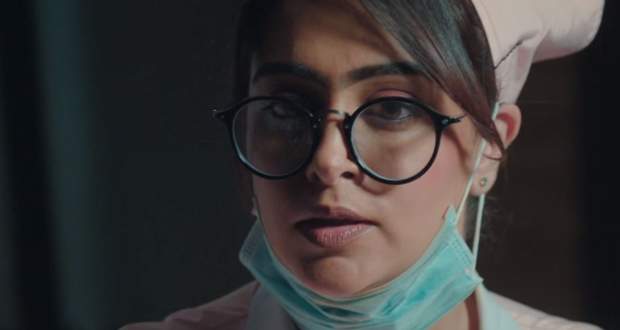 Today's Kahaan Hum Kahaan Tum 7 Mar episode starts with Sonakshi slapping Nishi and saying she was killing a mosquito. Tulsi and Simmi ask Sonakshi to go inside in quarantine ward.

Tulsi explains that Shivpriya Parvati is specialized in dealing with such cases. Simmi is worried about Rohit while Sonakshi assures that he will be alright.

Suman asks Sumit to search for Pari while later learns that she is at Sippy mansion. Pari wants her child to get its rights while Suman asks her to return.

Pari doesn’t tell her whole plan but wants to remove Tanya from their life. Meanwhile, Suman finds Sonakshi is missing from her room.

Sonakshi meets Rohit and gets upset to see him in that condition. Rohit gets conscious and after a while recognizes Sonakshi. He asks her to leave while Sonakshi says she knows the truth.

Rohit tries to sit up and later gets more critical. Sonakshi asks Tulsi about Rohit’s doctor while Tulsi says she is suspicious of Dr. Mathur. Sonakshi decides to confront him.

Meanwhile, Veena gets shocked to see Pari in the Sippy mansion. She asks her to leave while Tanya says she will stay there as she is pregnant with Rohit’s baby.

Tanya says she would also leave if Pari leaves. Later, Tulsi and Sonakshi ask Dr. Mathur about Rohit’s condition while he reveals that Nishi said she will give the antidote. Sonakshi is sure that Nishi has not given him the antidote.

© Copyright tellybest.com, 2020, 2021. All Rights Reserved. Unauthorized use and/or duplication of any material from tellybest.com without written permission is strictly prohibited.
Cached Saved on: Monday 29th of November 2021 05:47:19 PMCached Disp on: Wednesday 1st of December 2021 03:43:07 PM