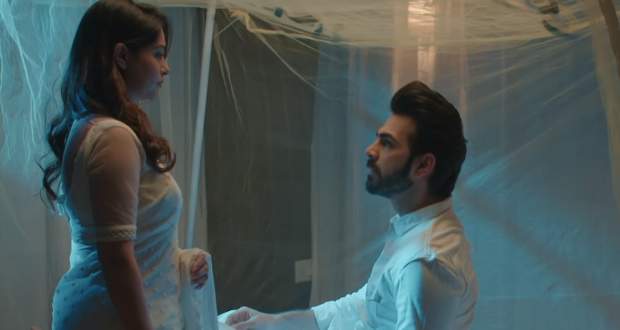 She gets suspicious of Parvati nurse and enquires about her from Kerala hospital. Also, Suman gives a holy thread to Sonakshi for Rohit while Sonakshi asks Suman to go in front of Nishi.

Sonakshi tells Nishi that someone has come to meet her from ministry. She praises Nishi for the antidote and asks her to go to the waiting room to meet the minister.

Sumit has disguised as the officer from ministry and takes her interview. He further tells her that her name might go for the president award. At the same time, Nishi learns that there is no Parvati nurse in Kerala hospital.

Sonakshi gets the keys from Nishi’s room and later Nishi confronts her. Sonakshi says she must have mispronounced her name while Nishi again calls the hospital.

The hospital confirms that Parvati is a nurse in their hospital and has gone to help in Sippy hospital. Nishi further asks her what she was doing in her room.

Sonakshi asks Tulsi to start the procedure while she rushes to get the antidote. Rohit gets in a critical condition while Sonakshi gets stuck in the lift.

Rohit dreams of being with Sonakshi and they share some romantic moments. He says goodbye for the last time while Sonakshi wants him to pay for all his wrong deeds.

Rohit takes his last breath and is declared dead by the doctors. Nishi gets happy that Rohit might be dead and asks Veena about the same. Veena says Rohit is safe now.

© Copyright tellybest.com, 2020, 2021. All Rights Reserved. Unauthorized use and/or duplication of any material from tellybest.com without written permission is strictly prohibited.
Cached Saved on: Monday 6th of December 2021 04:16:44 PM