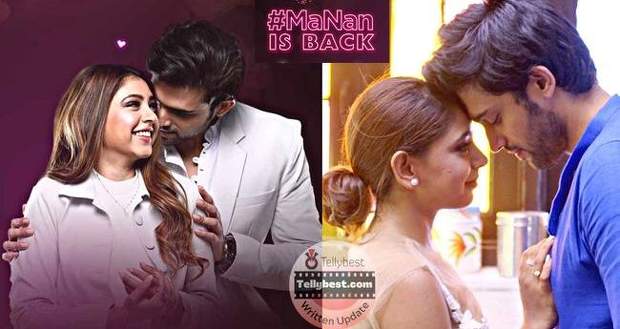 Manik pours the coffee into two mugs and hands over one to Nandini, all the time aware of the awkward glances she is passing her way and avoiding him at the same time after the previous night.

Manik sits at the dining table, sips his coffee, and tells Nandini that they should talk about whatever happened between them the previous night.

Nandini remarks that she had never thought Manik would ever talk about talking as he never preferred talking things out.

Adding to her words, Nandini tells him that too many feelings were bottled up inside her that exploded out in the night.

Manik counters that she is agreeing to have feelings for him.

However, Nandini reports back that she just said the feelings "were" bottled up, not "are" bottled up. So they should pass it on.

Not meeting the eyes, Nandini starts dusting again while Manik stands up and holds the duster, pulling her close to him in his chest.

Nandini stares at him mesmerizingly with her adorable face which is dangerously close to Manik whilst he also stares down into her big innocent eyes.

Nandini closes her eyes in anticipation, wanting Manik to claim her plump lips with his as she lifts on her toes.

Manik watches her actions and smirks at her for having proven that she does have feelings for him.

Nandini opens her eyes when she doesn't feel Manik's lips over hers and gets irked seeing the smirk plastered on his lips where her lips should have.

She asks him to leave the duster while he taunts her to see the obvious and turns around.

Nandini informs Manik that Aliyah didn't return at night and asks him to call her.

Elsewhere, Yuvaan and Aliyah are sleeping together, with Aliyah having her arm draped around Yuvan's bare chest while her hands entwined with his under the sheets covering their half-naked bodies.

Latika comes to see Yuvaan and knocks at his door, waking him up.

Opening the door, Yuvaan sees Latika and asks her why she is there while her eyes shift to the girl sleeping in his bed.

Yuvan takes Latika to the side. She states that they have been friends since her diaper days which doesn't let her forget him.

Further, she asks him the reason for ghosting her out.

Yuvan frowns at her and replies that he is trying to get away from the past and the people who remind him of it as he can't handle the trauma.

Latika feels offended that he feels she would rub the drug incident on him and mocks that the chick in his bed is helping him forget it.

Yuvan defends her and says that the girl is not judgemental like Latika and he wants people who accept him.

Manik & music don't get along

Later on, Aliyah returns home and Nandini asks her about not coming back home at night.

Aliyah makes up an excuse of meeting her old friends and diverts her attention to Nandini who is going towards her bathroom.

Nandini gets awkward, unable to think of an excuse for not using her bathroom, and retreats to her room which is also Manik's room.

Nandini tiptoes to the room and looks here and there for Manik.

As he comes out of the bathroom she tries hiding behind the wardrobe doors but gets caught by Manik as the mirror reflects her.

She laughs it off making a random excuse while her eyes fall on the red diary which is Manik's song diary.

She picks it up, looks at Manik, and asks why it is not in the music room and her mind starts working a little fast as questions come one after another.

She asks him about not singing and having alcohol since she has come back and also mentions the inauguration night.

Manik gets agitated with the questions and asks her not to run her brain too much as it is cooking up stupid stories.

Nandini tells him that this person is not him as he couldn't leave his guitar for a minute and now he doesn't touch it.

Manik snaps at her that he is here to fight Nyonika till his father returns as he can't let his company go in hands of that vile woman.

Meanwhile, at SPACE academy, the students are ready for MUSICANA auditions.

Kashi and Advait meet and discuss the party. Advait tells Kashi that some tension is going on between Nandini & Manik.

On the other hand, Seher and Latika tell Rishabh that he can get favor from Nandini and doesn't need to audition.

Rishabh denies it and leaves for an audition with Latika.

Auditions begin with Kashi doing a rap, Yuvaan playing the guitar, Latika singing a song, and Advait as a guitarist again.

Later, Seher mocks Kashi for being a rapper as she was bad-mouthing Manik's songs.

Kashi challenges Seher to a rap battle which the latter puts down saying it is not her style and goes on stage for her turn.

Manik asks Seher to present her original composition which she sent during the admission.

Meanwhile, Kashi looks at Seher with cold eyes remembering what Seher said at the party.

After Seher, Manik starts snapping at students as they continue to disappoint him with their sore throats.

Nandini takes the opportunity and asks Manik to sing and tell them what he is looking for.

Manik gets angry and denies her while she deliberately pushes his buttons challenging him.

Manik announces a 5-minute break and takes Nandini backstage to talk to him.

He questions her why she is instigating him and asks if she wants to know the reason behind him not singing.

Answering her questions, he states that he has not been singing for 6 months now, since the day she left him.

He holds her responsible for taking away his music and gives a reality check that things are not the same anymore.

Nandini gets stunned hearing this her eyes start tearing up.

She snaps at him that she left him because the journey was just too painful. They were not together despite being "together".

She starts leaving while Manik stops her but she doesn't listen.

Manik's eyes fell upon Advait who was eavesdropping on their conversation.

Advait comes ahead and makes the excuse of looking for Manik to apologize for the cafeteria incident.

Dismissing him, Manik leaves and heads to his and Nandini's dream house.

His mind goes 2 years back in memory lane when he had gifted the bungalow to his love and her reaction was so satisfying.

Meanwhile, Nandini is also at the bungalow, reminiscing about their past.

Both of them are in the garden area where they had built a colorful house like their fireflies.

Manik spots Nandini inside the house who is tearing up silently while he stands outside.

Nandini also sees Manik and after a moment starts leaving but the latter doesn't allow her and hugs her.

He says that they need a break and she should let go of the things.

Further on, Manik is sitting on the poolside lost in thoughts and Nandini comes there with a sorrowful face.

Manik starts speaking, with his back facing her, and tells her that he feels sorry for behaving badly during the day and asks her to not think of the things he said. He doesn't hold her responsible for taking away the music.

He stops speaking further as he spots the luggage near her on turning around.

Standing up he goes near her and questions.

Nandini says that she can't go further than this with him like this.

Manik says that they work things out but Nandini denies saying that she cannot forget the past.

Frustrated, Manik asks why they always have to run behind a single thing and why they can't just forget their past.

At this Nandini bursts at him saying that she can't forget that they were pregnant.

The words hit hard to Manik and he remains at a loss for words.

Nandini further says that she had the baby in her stomach, could feel him, and cannot forget him just like Manik who had cut and thrown him out.

Manik gets offended and drags her luggage to the elevators.

He turns his back on her while she stays there for a moment staring at it.

As she starts leaving, he holds the handle of the suitcase. He says that all the time he has considered her right but for the first time she is wrong and retreats his hand back.

Nandini stays in her place for a few moments and then leaves afterward while he watches her entering the elevator.

© Copyright tellybest.com, 2022, 2023. All Rights Reserved. Unauthorized use and/or duplication of any material from tellybest.com without written permission is strictly prohibited.
Cached Saved on: Wednesday 25th of January 2023 10:31:49 AMCached Disp on: Tuesday 31st of January 2023 07:54:13 PM