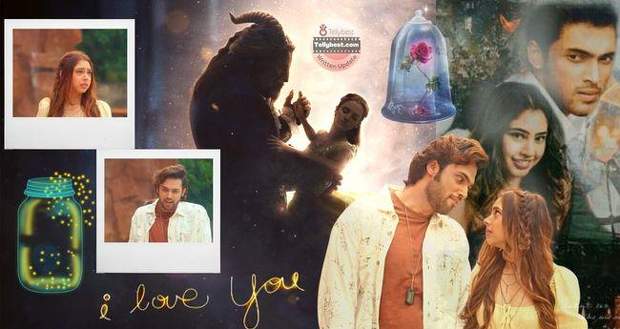 Today's Kaisi Yeh Yaariyan 4 (KYY4) 23rd December 2022 episode starts with Nandini sitting on a hammock as she thinks about finding a new house soon as she has left Manik's house.

Meanwhile, Manik is on the beach and calls Rishabh who informs him that Nandini is still staying at a hotel and has hired a broker to find a new house.

Rishabh asks Manik if things are okay between him and Nandini and Manik asks him not to worry since MaNan always finds a way together.

Manik then asks for the broker's number and decides to stall Nandini from finding a house for herself.

On the other hand, the broker who shows Nandini various houses keeps getting calls from the landlords that the house he is showing to his client currently is all booked.

Little does a frustrated Nandini knows that it is all done by Manik.

Meanwhile, Aliya comes downstairs to see off Yuvan but she sees Manik sitting inside his car and urges Yuvan to go quickly.

She then walks over to Manik and comments about his cheeky smile, asking him what is with that look.

Manik asks Aliya not to go there as one tag of the monster given to him by Nandini is more than enough.

Aliya then questions him where Nandini is and Manik replies that she has left as they were pretending to be together.

Aliya's brain clicks to form a conclusion and she reveals that Nyonika approached her, and tried to instigate her to form a romantic relationship with Manik so problems between him & Nandini crop up.

Manik reveals that Nyonika has always been like that and because of her, he needs to be with Nandini.

However, Aliya laughs out loud, telling Manik that he needs Nandini either way and has to go and find her.

Just then, Manik sees Nandini and the broker coming to his apartment's building and smiles.

Later, Nandini finally gets the home just behind Manik's apartment and gets visited by him in the evening.

Meanwhile, Advait's father who is also Nyonika's new boyfriend greets Advait and asks if he has gotten a new girlfriend in college.

Advait denies while Nyonika asks Advait's father not to tease the boy.

Nyonika then tells him about Nandini who is Manik's ex-girlfriend and someone who is able to control Manik better than her.

Meanwhile, Manik brings coffee for Nandini and refers to her as his new neighbor.

Nandini gets irritated by Manik's smirk and tells him to go out since she has a lot of work to do.

Manik comes in and tells Nandini to take a break and enjoy his coffee.

However, Nandini replies that she doesn't need a coffee but a hug that can make her forget all the worries, a kiss that breathes warmth back into her soul but Nandini holds back the tears that emerge in her eyes.

Nandini whispers to Manik who is standing just a foot away from her, saying she cannot ask all these things from him again because if she does, she will feel emotionally weak.

Just then, a mouse appears in Nandini's apartment and she squeals, making Manik laugh.

Setting the coffee mugs aside, Manik takes a broomstick and tries to scare the rat away while Nandini hugs him tightly like a koala bear.

Nandini closes her eyes fearfully while Manik looks at her from atop, his chin resting against her head.

He hugs her tightly and places a kiss on the bridge of her nose while Nandini slowly opens her eyes and asks him if the rat is gone.

Manik nods and she breaks away from him, saying he always uses her weakness.

Manik gets irritated and leaves Nandini alone by saying even though his coffee is not good, she can drink it.

Later, at SPACE, everyone starts accusing Seher of acing her audition by copying a Japanese old melody, including Advait.

The college students call Seher a cheater and she hides in the corner while Rishabh comes to shield her.

The dean arrives along with Manik and Nandini who see Seher getting shunned and protested against by the students to throw her out.

Seher screams and says it is very easy to call her a cheater but they do not know the reason or the backdrop of why she did it.

Seher storms out of the campus and leaves, crying while Manik asks Nandini to go with him to reach Seher since her condition wasn't good.

Nandini sits in the car with Manik and asks for the password of his phone to turn on the GPS and he says, Nandini.

Nandini pauses and smiles as Manik drives to Seher's address.

A house which is situated by the sea is Seher's house and Manik and Nandini hear a baby crying.

Seher gets confounded, asking them why they are there as Manik asks what is this baby noise.

Seher's household help tells them that Seher's baby, Noor, is stuck inside and Nandini in panic, asks Manik to open the door.

Seher rolls on the ground and cries as Manik breaks the door and takes Noor out in his arms who is crying.

He tries to shush her softly while Seher says this baby has been a problem in her life and making her forsake her future.

Manik gets angry and gives it out to Seher, stating that if she didn't need Noor, she need not have her in the first place.

Nandini Wonders About Manik Being A Father

Manik storms out before saying that he knows what it feels like to be an unwanted child.

Nandini follows Manik who tries to cool off his anger by watching the sea waves.

She asks him how he would have been with their baby but before the baby even entered the world, he said he didn't want it.

Manik glares at Nandini and says she can keep waiting for his answer since he is already a monster to her.

© Copyright tellybest.com, 2022, 2023. All Rights Reserved. Unauthorized use and/or duplication of any material from tellybest.com without written permission is strictly prohibited.
Cached Saved on: Wednesday 25th of January 2023 10:58:57 AMCached Disp on: Sunday 5th of February 2023 04:28:06 AM