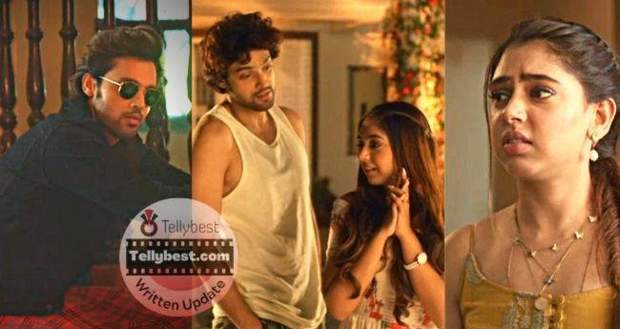 Manik looks at his bald manager in disbelief and says he won't do such cringe-worthy moves.

Meanwhile, Nyonika comes to taunt Manik about losing his mind ever since Nandini left him.

Manik ignores her while Rishabh and Nandini get into an argument over why she couldn't convince Manik to get Rishabh an entry into SPACE Academy in Goa.

Nandini looks at Rishabh irritated and tells him that Manik isn't the only person that can help them and SPACE Academy is not the only college left in this world.

However, Rishabh is stubborn and tells Nandini it is impossible for Manik not to hear her instruction since he used to be ready to sacrifice his life for her.

Later, Rishabh goes to the SPACE Academy campus and asks the chattering students where Manik Malhotra is.

The students jokingly point towards Manik's poster while another girl joins Rishabh and says they will both find Manik together.

On the other hand, Nandini goes to a chapel with dejected feelings and meets Manik there.

She asks him how he found her while he tells her their hearts are always connected.

She then realises that he tracked her phone and looks at him in utter disbelief.

However, Manik is serious and tells Nandini if she has to get Rishabh into SPACE Academy, she has to pretend that he & she are back together.

Nandini stands up immediately and tells Manik it won't happen while he shouts, saying he needs to do it to teach Nyonika a lesson.

Manik states her evil mother has already acquired shares in his father's company and he needs to pin her down.

Nandini starts to leave and bumps into a candle stand as her bag falls.

Manik bends down to help her but his fingers get hurt due to the hot wax.

Nandini blows air on his fingers immediately while he looks at her intently.

Both of their fingers interweave on their own but Nandini pulls herself apart.

She tells Manik not to use her compassion for love while Manik grabs a candle and pours hot wax on his fingers deliberately.

She throws the candle away, shouting at Manik, and leaves the chapel crying.

Phone Exchange And Manik Finds Something about Nandini

However, both of their phones get swapped with each other and Nandini realizes this when she gets a call from Rishabh who tells Manik about a chance to study at SPACE.

Nandini tells him that it's her and Rishabh feels happy, thinking Nandini has convinced Manik.

Meanwhile, Manik gets a call on Nandini's number from Omkar who says Nandini is asked to join the Space Travel Mission.

A flashback is seen where Nandini lost the same opportunity a year ago due to some medical complications.

The flashback ends and Manik tells Omkar he will convey this message to Nandini.

The next day, it is the inauguration night of SPACE academy and Nandini & Manik have tried several times to enter each other's phones.

Nandini goes to meet Manik backstage and he asks if her password is Monster.

She says yes and states she kept it so she can be reminded how much of a monster Manik is.

Manik gets shaken up by Nandini's words and is unable to perform on the stage.

Later, Nandini joins him and sings for him while he plays the guitar at full power.

Manik's fans cheer up and the media goes into a frenzy asking Manik's manager whether Nandini & Manik are back.

Manik and Nandini's Romance between the Fight

After the concert has ended, Nandini takes Manik to a private space and says she will be there tomorrow.

He gets confused by her gesture and to tease her, he puts her on the top shelf.

However, he puts her down as both of them come close to each other like they were before.

Manik asks her why she is doing this for him when she has the opportunity of Space Travel but Nandini without any emotion, says he should accept whatever he is getting through her.

© Copyright tellybest.com, 2022, 2023. All Rights Reserved. Unauthorized use and/or duplication of any material from tellybest.com without written permission is strictly prohibited.
Cached Saved on: Wednesday 25th of January 2023 05:54:17 PMCached Disp on: Monday 6th of February 2023 02:18:23 AM