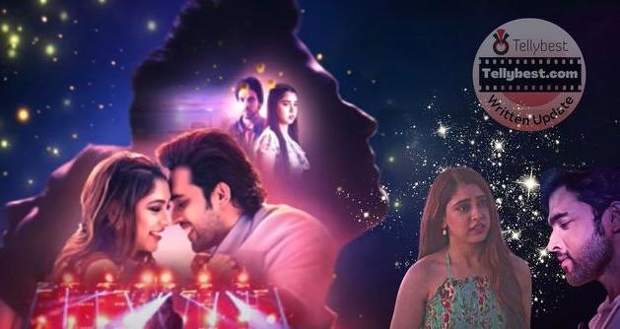 Manik holds Nandini tightly and guides her through the crowd as the uninviting cameras flash on both of them.

Rishabh takes Manik's name and gets noticed while Nandini tells Rishabh to hold on as his seat in SPACE is confirmed.

He thanks Nandini while Manik looks at her weirdly as they did not talk about it before.

Meanwhile, the fangirl who released Manik's video notices how close Rishabh is to Manik as she had seen him on the campus before.

Seeing Nyonika close to them, Manik holds Nandini tightly and lets her know that with Nandini, he is invincible.

Nyonika tries to mock laugh and says she knows they are doing a publicity stunt but Manik does not confirm it.

Back at Rishabh's house, Nandini's Chacha & Chachi get so happy to see them both together.

However, Venkatesh tells Shannoo that until they both get married with South Indian traditions, he won't like it.

Shannoo scolds him saying, it was because of him that they shifted to Goa last year and had to break up.

The next day, Nandini packs her bag to shift to Manik's house and Rishabh takes help from her to fill out the SPACE Academy Admission form.

Meanwhile, Manik cleans all the trash from his new house & discards all the beer bottles so the space is crystal clear for Nandu to arrive.

However, before sitting in the taxi, Nandini calls Monster Manik & tells him it will be too painful for her to live in the same house but Manik says it's another house and she does not need to worry.

Nandini arrives in the taxi while Manik's condo is on the top floor.

From the balcony, he waves at her while she scrunches her nose, and pulls the heavy luggage into the lift.

While Manik waits for her near the lift, a fly disturbs him and he grabs a cushion to bat the fly with.

However, the cushion rips apart and the feathery cotton falls all around, including Nandini's face as well as Manik's.

Both of them lock their eyes as Manik remembers several flashbacks.

Seeing the house clean, Nandini asks him where is the trash but he says there was no trash, to begin with.

He finally admits that he cleaned the house when Nandini looks around with the detective's eyes.

While showing her the room to stay in, Manik says that Omkar called on her phone for Space Mission but she makes it clear that she doesn't want to go back there.

Manik scolds Nandini when she denies staying in his room and shifts to another room.

However, the room is all messy, and Manik & her fight over it.

Later, Nandu calls Shannoo, saying it looks like she made a mistake coming here but Shannoo reminds her how lovely Manik is for her.

Just then, Nandini sees a naked Manik swimming and ogles at his body.

When he comes inside, Nandini shows him the designated border she made so both of them live in their separate zones.

Further, Nandini asks Manik to clean the puddle of water he created but he walks away from her.

She then grabs his hand and makes him clean but all those painful memories strike him, as she walks away.

At Space Academy Hostel, Latika walks into Rishabh's room and asks him how he knows Manik so well.

He tells her that he is Nandini's brother while Latika dreams of meeting Manik personally through Rishabh.

Just then, Nandini arrives and sees Rishabh's new friend, Latika greets her and leaves both of them alone.

Once Nandini returns to Manik's house, she screams his name when she notices two cocktail dresses of women lying on his bed.

Nandini grabs it and is about to throw it at Manik but it lands on Alya's face who comes out of the shower.

Alya Saxena is back in KYY Universe!

In a flashback, Alya is seen contacting Manik and telling him her woeful story of how her business failed.

When Manik sees the condition of the hotel she is going to stay in, he convinces her to stay at his condo while Alya says Dhruv and she aren't together anymore as he cheated again.

Flashback end and Manik finds himself the target of Nandini's wrath when she throws a hairbrush at him.

She states that she can very well see through him as he wanted her to stay in his room, so that is why he brought Alya.

Later, Alya meets Yuvan at a pub and both of them get cozy with each other.

Meanwhile, Manik calls Nandini to get out of the room for dinner but she doesn't respond.

Why did MaNan break up?

He then picks her up in his arms and makes her sit to eat.

Manik claps his hand when Nandini says she is here to ruin his life.

He screams sorry many times while Nandini tearfully tells him it is easy to apologize not forget.

After she gets up from the table & leaves, Manik loses his temper & throws the utensils on the floor.