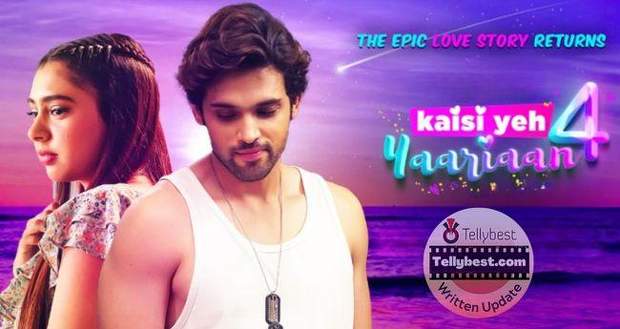 Seeing Nandini’s expression, he asks her what the problem is and she tells him that she does not want to sleep in the same room.

Manik reminds their rule of sleeping in the same bed even if they argue and are mad at each other.

However, Nandini argues with him saying that it was a different thing as they fought for a day in the past while they are fighting for the past seven months now.

Manik looks away as he says that she is still not satisfied and leaves to change his clothes while she shouts after him to look decent.

Once Manik comes out of the shower, he sees that Nandini is tucked under the covers and asks her to see that he has dressed decently.

He sees the AC turned off and asks her why she has turned off the AC while snatching the covers from her.

Same MaNan is back?

She gets up on the bed and shouts at him that she is freezing cold.

However, Manik also argues that he's going to die of heat in Goa.

They both see the remote of the AC and lounge to fight for it while Nandini says that they have argued over the same thing over a thousand times.

Manik tells her that he should convince him like she used to which makes both of them imagine them getting close.

Coming back to their consciousness, both Nandini and Manik get away from each other as Nandini starts the AC and covers herself with the blanket

However, Manik feels defeated as he turns off the AC and goes to sleep.

Elsewhere, Alia fixes her dress as she asks Yuvan what purpose he has in Goa.

Yuvan smiles as he tells her that he will go where the wind takes him.

Alia smiles as she starts leaving saying that she will meet again if the world desires it.

However, Yuvan stops her and pushes his phone toward her asking for her number while telling her that they should not leave everything to the world.

Alia once again smiles as she punches her number into his phone and he kisses her.

The next morning, Nandini wakes up in Manik's arms and feels emotions caging her mind as she leaves his side and goes to freshen up realizing that she has missed her alarm.

Manik also wakes up and gets shocked as he sees missed calls and messages from his managers.

He goes to the shower not realizing that Nandini is in it.

Nandini argues with him while they bring up their past.

Later, Nandini looks for something and gets angry at Manik for unpacking her bags while he finds her lingerie and tells her that he knows what she is looking for.

Afterward, Manik arrives at SPACE where the principal is giving the batch 2022 a speech on discipline and attendance.

However, Manik tells the students to focus only on Musicana 2022, their annual national music competition.

The best band from the batch will represent SPACE Goa in the competition.

Manik encourages all the students and hypes them up.

Latika tells Rishabh that they have to make sure Manik mentors their band only when they hear another student complaining that they should focus on their attendance instead of some music competition.

Latika fights with the girl and leaves in anger while Rishabh goes after her.

Meanwhile, Manik's manager keeps pestering him saying that he should not waste his time on SPACE and should focus on his concerts and come back.

Manik gets an idea from the manager and tells him to hype up both Nandini and Musicana by announcing that Nandini is going to become a mentor from SPACE.

On the other hand, Omkar meets up with Nandini and she tells him that she does not want to work at NSA anymore.

However, Omkar tells her that he is there to talk about her sister Kashi who has recently joined SPACE Goa.

He reveals to her that Kashi has been ignoring him like the plague ever since she found out about his sexuality and requests Nandini to mentor her.

Nandini says that she has no relation with SPACE and Musicana while he shows her the video stating that she is going to become a mentor for Musicana.

Meanwhile, in SPACE, a guy, Advait, with the same shirt as Latika looks for Rishabh while Latika points out their matching shirts.

She says that she didn't know it (shirt) was unisex while Advait misunderstands thinking that she is talking about him and starts a fight with both Latika and Rishabh.

Manik overhears them and gets angry at the guy while Nandini comes there and takes Manik away who shouts at Advait to collect his rustication letter from the office.

Rishabh and Latika leave while Kashi sits with Advait and tells him that they are friends from now on since they both have Manikophobia.

Nandini argues with Manik telling him that he cannot grab an 18-year-old by the collar.

They both again argue while Nandini calls his songs trash.

He tells Nandini that he has already got awards for those songs while Nandini reminds him that he lost her.

Later, Manik & Nandini attend the party while Rishabh tells Manik that he missed him.

Meanwhile, Nandini goes to Advait and tells him to behave himself since this is her house, and not a college dorm.

Alya then hosts a Ping-Pong game which Latika & Yuvan participate in it.

Yuvan gets the dare of going shirtless.

Meanwhile, Manik goes after Nandini who is now sitting in a room all alone.

Their old habits return as Manik lays on top of Nandini while letting her fall on the bed.

The neon lights make up for the atmosphere while Manik fiddles with Nandini's top and kisses her.

However, the window which is open nearby steals Nandini's attention and she sits up, pushing Manik away.