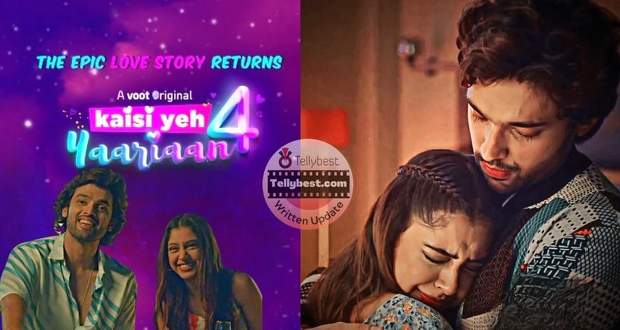 Today's Kaisi Yeh Yaariyan 4 (KYY4) 16th December 2022 episode starts with Nandini crying while driving the car as she remembers the conversation with Manik telling her that she is wrong for the first time in their relationship.

Flashback goes to a year back when Nandini enters the flat she shared with Manik and sees the whole house decorated with roses and a dress put out on the bed for her to wear with a note from him.

Nandini wears the dress and goes to the beautiful candle-lit decorated place where Manik is waiting for her.

He tells her that he should compliment her and says that she is looking more beautiful than the decorations but he will not since he is quite impressed with his work.

Nandini laughs at Manik's comments as she sits on the chair opposite him.

Manik praises Nandini for getting the opportunity to see the stars so closely and tells her that he is also quite lucky cause he managed to woo her with his romance and hard work.

Manik makes her stand up and tries to kiss her while she tells him that he did not need to plan such an elaborate plan for just a kiss.

However, Manik tells her that he had something else planned for her and makes her sit beside him as he starts the projector.

The projector shows a video message from her family members congratulating her for getting into the space project.

Nandini gets hesitant as she tells Manik that the medical results are yet to be out.

Manik tells her that the medical test is just a formality as the video message cuts to him cooking an egg for her.

In the video, Manik says that he will become a chef by the time she returns when the egg falls from the pan onto the ground.

Nandini and Manik romance and KISS!

Nandini laughs as she asks him if he brought the dirty egg for her and he refuses while moving away from her.

She throws sand at him while a sea glass also gets thrown at him along with the sand.

He laughs at Nandini and throws sand back at her while she acts getting the sand in her eyes.

He takes her into the glass house and blows air into her eyes while she gets closer to him and kisses him.

Manik slowly undoes Nandini's dress as she moves her hair forward and they spend the night together sensually under the covers.

Back in the present, Nandini stops the car abruptly as she sees a drunk man crossing the road and tries to stop the memories from slowly lurching back into her head.

Another flashback shows Nandini returning home with a down expression while Manik is packing his bags for his concert in Dubai and looking for his passport.

Nandini gives him the passport and tells him to sit beside her as she has something important to tell him.

Nandini looks into Manik's eyes and tells him that she is pregnant.

Manik thinks that she is joking and continues to pack his bags while Nandini tells him that she has to drop out of the space program since she is pregnant.

Manik says that is it crazy not knowing how to react while Nandini asks him what he means.

Heaving a sigh, Manik asks Nandini if she wants this while she tells him that they never talked about it but she does want babies in the future.

Nandini asks him if he wants a baby while Manik hesitates.

However, he finally caresses her face as he congratulates them on the good news.

After a month, Nandini and Manik go to the hospital and get happy seeing their baby on the monitor.

The couple spends the passing months with happiness while hiding the news from Nandini's family as she is still not ready to share the news with them.

Later, Nandini is resting when Manik asks her if she's okay.

Nandini asks him if something is bothering her and he finally reveals his insecurity.

He tells her that he fears he will mess up his parenthood and freaks out while she tries to calm him.

He asks her if she's happy and she tells him that she is happy.

However, Manik pulls out the NSRU files from her drawer and asks her why she has the files still and gets lost after seeing the list of candidates who are going for the space program.

She looks away from him while he tells her that he knows what it feels like to be born to parents who don't want the baby and does not want their baby to end up the same way.

Manik tells Nandini that they should reconsider their decision of becoming a parent.

Later, Nandini rushes to the hospital due to the pain while Manik is at his concert.

The nurse calls Manik and he rushes to the hospital where the doctor informs him that they have to abort the baby due to internal bleeding issues of the fetus which can take Nandini's life too.

Manik signs the papers and Nandani gets an abortion.

11th months in the past, Manik tries to cheer up an emotionless Nandini who is in depression.

Nandini grieves the loss of the fetus she grew attached to while pushing away Manik in the process of it and not understanding his tries to help her move on.

While Manik records his party song, Nandini feels abandoned by him.

Later, when Manik asks Nandini why she isn't ready and she tells him that she is leaving him.

Nandini accuses Manik of abandoning her while she was grieving and telling him that he has wished their baby away.

Manik feels upset as he tells Nandini that she never once looked at him and asked him how he feels.

However, Nandini calls him a monster and leaves while Manik grieves in the glass house with the shattered glass mirroring his shattered heart.

Back in the present, Nandini drenches in the rain while her tears disappear with the raindrops.

At the same time, Manik holds the jar with the fireflies and runs out onto the road while shouting Nandini's name.

© Copyright tellybest.com, 2022, 2023. All Rights Reserved. Unauthorized use and/or duplication of any material from tellybest.com without written permission is strictly prohibited.
Cached Saved on: Wednesday 25th of January 2023 09:52:20 AMCached Disp on: Sunday 5th of February 2023 02:50:46 AM