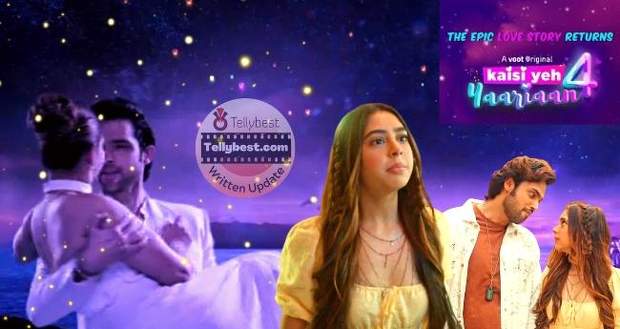 Today's Kaisi Yeh Yaariyan 4 (KYY4) 23rd December 2022 episode starts with the Dean of SPACE Academy informing the students that today the teams will be picked out for a band that will be then trained under Manik & Nandini's guidance.

However, Manik isn't here which confuses Nandini who then asks the dean if he can know Manik's whereabouts and whether he is sleeping by calling him.

The principal looks at Nandini as if she has grown two horns and sarcastically replies that he didn't know all these tasks had to come under his job profile.

Meanwhile, Seher gets happy and tells Latika and Rishabh that yesterday everyone wanted to suck her blood alive but life is full of surprises, and she is feeling very happy.

On the other hand, Nyonika goes to NSRE, the space mission program Nandini was working with ten months ago.

Meanwhile, Latika asks Rishabh to call Manik since he knows him personally but Rishabh goes to Nandini where she is instructing her band.

Nandini excuses herself for a moment and Rishabh asks her to call Manik.

However, Nandini gets angry but then feels worried for Manik when his manager asks Nandini where he is since he didn't even return home last night.

Advait hears this as Latika and Rishabh along with Yuvan discuss the problems in Nandini & Manik's relationship.

Advait then calls Nyonika and lets her know that there is something off with MaNan's relationship and she asks him to seek details about it.

Meanwhile, Nandini goes to Manik's house, and she hears the whistle of the kettle kept on the stove.

However, Manik isn't there and she turns it off. She then discovers the old melodies Manik wrote after their breakup and gathers them in her hands, feeling pretty emotional.

Meanwhile, Manik who is hanging out in an amusement park calls Seher to let her know that he brought Noor with him.

Seher gets awkward and doesn't reveal the deets of Manik's absence to Latika and Rishabh.

He then shares his phone location with Nandini who arrives there and sees Seher with Baby Noor.

Nandini goes to the bench where Manik is sitting and shows him the melody papers she is holding.

She questions what are these and asks him why didn't share his pain with her when she does it all the time.

Manik just smiles at her and goes into the past, revealing that when he found out she was pregnant, he was nervous and excited.

However, he also saw how excited she was to progress into her career to go to space and blocked his happiness from being shown.

He reminds her of the time when Nandini was returning from her office and didn't even notice that she was about to fall while scrolling her phone to see whether she made it into the space travel program or not.

Manik says that he didn't want her to destroy her dreams and be the selfish one.

Nandini asks them then why did he leave her and Manik says when they lost their baby, the doctor asked him to be the stronger one but seeing Nandini in pain, he started making stupid songs about drinking alcohol to block out HIS share of the pain.

(So far Manik was happy that Nandini was pregnant but she felt held back due to the baby because of her career also.

So Manik didn't reveal how happy he was and she took it the wrong way as if he didn't care about her.)

He then tells Nandini that he sang the song he wrote for the baby at the awards but she took it the wrong way and broke up with him.

Tears stream down Nandini's face as she urges Manik to sing that song again to her this time.

Holding her hand, Manik sings the song "Savera Ho Raha" as they tread slowly into the amusement area.

At the beach, after finishing the song, Manik breaks down on his knees and starts crying while Nandini strokes his head, feeling the pain Manik is going through since her dreams were always his, as he learned to live by forgetting himself into the love he wanted to provide to her.