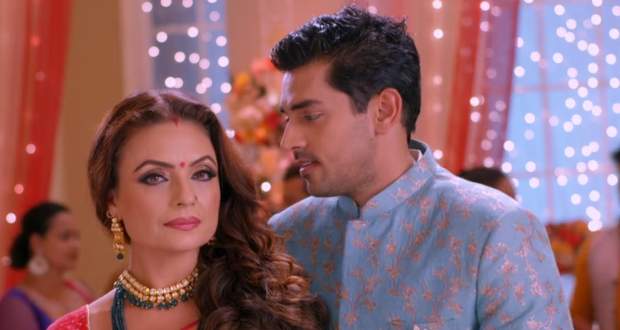 Today's Kartik Purnima 24 Mar episode starts with Kartik calling for Vicky on the road and enquiring about the lady. Vicky makes excuses and also refuses to take a lift.

Kartik convinces him while elsewhere Biji wonders why Purnima is upset. Purnima is feeling nostalgic and doesn’t feel like getting married and leaving the house.

Kartik is suspicious of Vicky as he directs in a confused state. Kartik tries to reach Purnima overcall but she is busy with spending quality time with Biji.

Soni gets mad at Mahira for arranging only two girls for applying Mehendi. Later, Kartik reaches Purnima’s home and finds Vicky there.

Kartik remembers that Vicky’s real name was different and is going alone while at the same time, Kuldeep and Beena come out with Shanaya to go for the Mehendi function.

Purnima refuses to go while Kartik insists them to come as they will be leaving for Canada. Later, Soni gets shocked to see Vicky and Purnima arriving in her house.

Soni is introduced to Vicky and Kartik explains that Vicky and Purnima will soon leave for Canada. A girl is outside Soni’s house and wants to tell her the truth before her life gets spoiled.

Soni congratulates Kuldeep and further taunts him for having a dark-skinned daughter. Soni sends Kartik to get some old Chachaji from his home for the function.

The Mehendi function starts while the girl enters the house. The girl tries to confront Purnima while Soni talks to her first.