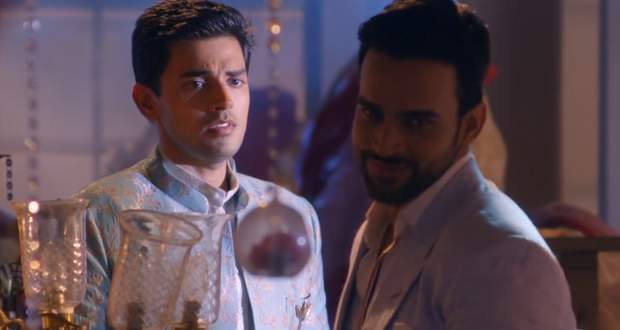 Today's Kartik Purnima 25 Mar episode starts with Twinkle eating pastries while hiding and finds Purnima. She puts Mehendi on her hand and also offers her pastries.

The girl continues to search for Purnima while she finds her behind a tree on the lawn. She tells her that Vicky is fraud and she should not marry him.

She explains everything but is not able to tell everything to Purnima as someone takes her away for a dance. Vicky witnesses their conversation and gets worried.

Twinkle brings Purnima on stage and later Kartik. They both start dancing together on a popular number while Soni is not happy with it.

Shanaya and Sumreet also arrive on the stage and show their moves. Later, everyone joins in while Soni continues to fume in anger. She switches off the light while Purnima wonders about the mysterious girl.

Vicky catches the girl and threatens to kill her. Meanwhile, Soni confronts Purnima and asks her to stay away from Kartik. Soni reminds her of the conditions on which she agreed for the marriage.

Vicky gives one last chance to the girl and asks her to leave as far as she can. Meanwhile, Soni asks Purnima to leave while Kartik starts searching for Purnima.

He finds someone and thinks it is Purnima. He explains everything about Vicky while the person behind the curtain turns out to be Vicky. Vicky challenges Kartik that he can’t stop their marriage.