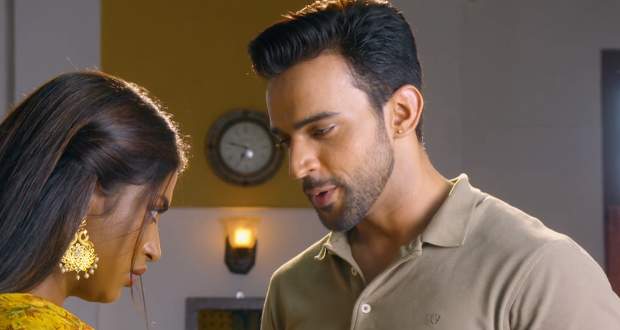 Today's Kartik Purnima 27 Mar episode starts with Kuldeep asking if Kartik is sure. Kartik shows the file in which Purnima’s property is being transferred to Joginder.

Kartik explains how Vicky’s name is fake and he is going to Canada alone. Meanwhile, Purnima is confused about the name written on her hand and seeing Kartik’s face.

At the same time, Vicky comes in Purnima’s house and threatens Purnima. He says he was kidding and asks for water. He further closes the door,

Kuldeep is angry at Vicky and his health gets affected. Meanwhile, Purnima comes out and finds Vicky drinking alcohol. Purnima doesn’t feel right and calls her father.

Vicky comes at the same time inside the room and suggests to share a room. He comes closer and closer to her and tries to molest her. He even asks her to drink with him.

Meanwhile, the pooja continues for Shanaya and Sumreet. Elsewhere, Purnima goes into the kitchen and receives a call from the same girl who reveals that she was also cheated by Vicky.

Purnima calls Kuldeep and he learns that Vicky is with her. Purnima slaps Vicky while Kartik and Kuldeep rush to save Purnima.

Later, the Prasad gets poisoned by a lizard while Soni asks to start the Pooja again. The Pandit however leaves while the family members get worried.

Upcoming Kartik Purnima episode update: Purnima is tied to the bed by Vicky while Kartik and Kuldeep reach to save her.