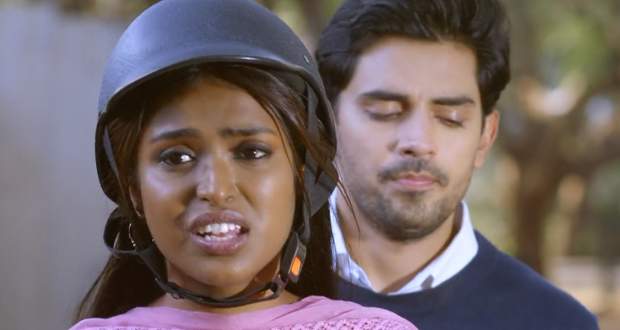 Today's Kartik Purnima 29 Feb episode starts with Purnima holding Kartik’s arm and Kartik looking at her. She comes to her senses and apologizes while later talks to her dad.

Kartik also takes care of her dad with love and this makes her happy. They share some cute moments while Kartik leaves. Later, Purnima’s father gets discharge and he comes home.

Sumrit arrives to meet Shanaya and takes her along with him. Purnima witnesses this and wonders where he is taking her. Meanwhile, Kartik calls Soni through Babli’s phone but still, she doesn’t talk to him.

Purnima tells Kartik about Sumrit taking Shanaya somewhere. Elsewhere, Sumrit is angry and drives really fast. He asks Kartik to get Soni to call him about the alliance.

Kartik tells Soni about Sumrit’s action and asks her to call him. Soni refuses to call Sumrit and is in no mood to change her decision. Kartik decides to take his father’s help.

Kartik seeks help from Purnima and follows them through GPS. Meanwhile, Shanaya feels scared and tries to call the police using Sumrit’s phone.

Soni calls Sumrit and asks him to come home. Sumrit refuses to come home if she doesn’t approve of the marriage. Sumrit stops the car while Purnima assures her mother.

Kartik ties Purnima’s hair while Sumrit threatens to kill himself.