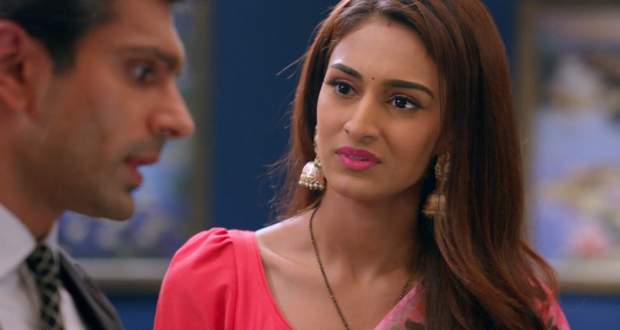 He calls her and wants her to break the relation with Bajaj. Later, Veena is decorating the Basu house for Cookie’s birthday party.

Veena gets confused when she learns it is Bajaj’s party in Basu mansion. She learns from Prerna that Bajaj acquired Basu house.

Further, Prerna learns that Veena is there with the decorating team of Vyaas. She thinks Bajaj did it on purpose to insult her mother.

Tanvi hears the argument between Prerna and Veena. She clicks a picture of them and decides to show it to Maasiji.

Bajaj comes and gets into a conversation with Mr. Vyaas enquiring about Veena. Later, he asks Veena to give money to Vyaas for decoration items.

Prerna misunderstands Bajaj of trying to insult her mother. She starts blaming him for the same and accuses him of thinking himself as a god.

Tanvi brings Maasiji to listen to their argument. Bajaj says he doesn’t need to please anyone and leaves. Maasiji decides to use Veena for eliminating Prerna from Bajaj’s life.

At the same time, Nivedita tries to mock Veena and tells her about Prerna’s stepdaughter.

The birthday party of Cookie starts and Prerna gets her ready.

Upcoming season 2 Kasauti Zindagii Ki (KZK 2) episode update: Maasiji decides to cut the rope of a decorative chandelier and blame it all on Veena.

© Copyright tellybest.com, 2018 & 2019. All Rights Reserved. Unauthorized use and/or duplication of this material without written permission from tellybest.com is strictly prohibited.
Cached Saved on: Friday 31st of January 2020 12:03:35 PMCached Disp on: Wednesday 19th of February 2020 01:23:13 AM