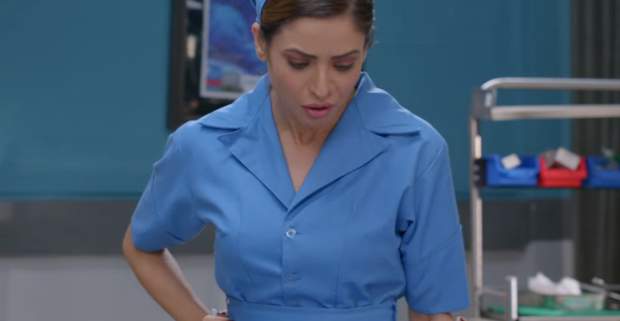 Today's KZK2 16 Dec episode starts with Komolika deciding to disguise as a nurse to kill Prerna’s child. She wears a nurse dress and a mask so that nobody recognizes her.

Anurag leaves to get the doctor while Komolika finds it as the perfect opportunity to enter Prerna’s room. Meanwhile, Anurag learns that the senior doctor has not sent any doctor for Prerna.

Komolika threatens to kill Prerna’s child while Anurag and the doctor enter the room. The doctor enquires about the nurse’s name while she says she is assisting Somesh.

Veena and Shivani also arrive at the hospital. Later, Ronit and Komolika make a plan and trap Dr. Kumar and hit him on the head.

Ronit helps Komolika to enter Prerna’s room while Anurag consoles Veena. Komolika has a knife in hand and wants to make a cut in Prerna’s stomach and pull out her baby.

Veena enquires if Anurag doesn’t remember anything of the past two years and Anurag wonders if Veena knows something.

Moloy and Anupam arrive and Ronit stops them from meeting Prerna. Komolika gets more time to kill Prerna’s child and Prerna gains a little conscious.

Later, Shivani sees Ronit and gets suspicious. Meanwhile, Komolika starts making a cut and tells Prerna that Anurag belongs to her only.

© Copyright tellybest.com, 2018 & 2019. All Rights Reserved. Unauthorized use and/or duplication of this material without written permission from tellybest.com is strictly prohibited.
Cached Saved on: Monday 24th of February 2020 08:05:22 AM