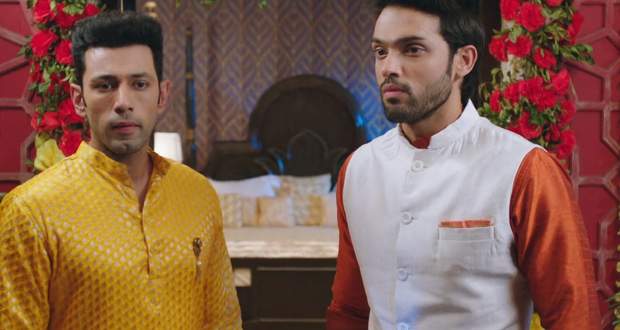 Today's KZK2 16 Oct episode starts with Anurag declaring he will prove Bajaj guilty using proofs. Bajaj hears their talk and Anurag is sure Bajaj will do something wrong in his angry state.

Anurag is ready to fight Bajaj’s actions. Meanwhile, Mehra tells Bajaj that Anurag has all the proofs and Sanjay has confessed everything.

Bajaj plans to kill Anurag while Prerna returns with Kuki. Bajaj locks everyone’s door in the house including the room where Prerna and Kuki are sleeping.

He removes the wiring of CCTV camera which is witnessed by Moloy. Bajaj sees Moloy and tells him he is going to kill Anurag.

Moloy calls out for Anurag while Anurag wakes up and is suspicious. Bajaj ties Moloy with red cloth and also closes his mouth with the cloth.

Bajaj reaches Anurag’s room and is about to attack with a knife when Anurag wakes up and saves himself. Bajaj doesn’t give up and continues to try.

Prerna and Anupam wake up and find themselves locked in the room. Prerna calls Anupam and is sure that something bad is going to happen to Anurag.

Anurag hits Bajaj with a bat while Prerna breaks free from her room. Anupam and Prerna find Moloy tied up on the floor.

Prerna runs to save Anurag while Moloy stands up but falls on the table.

Upcoming season 2 Kasauti Zindagii Ki (KZK 2) episode update: Prerna says she will die with Anurag if Bajaj harms him while Kuki arrives in the room and falls down.

© Copyright tellybest.com, 2018 & 2019. All Rights Reserved. Unauthorized use and/or duplication of this material without written permission from tellybest.com is strictly prohibited.
Cached Saved on: Friday 31st of January 2020 10:46:40 AMCached Disp on: Thursday 20th of February 2020 07:25:22 PM