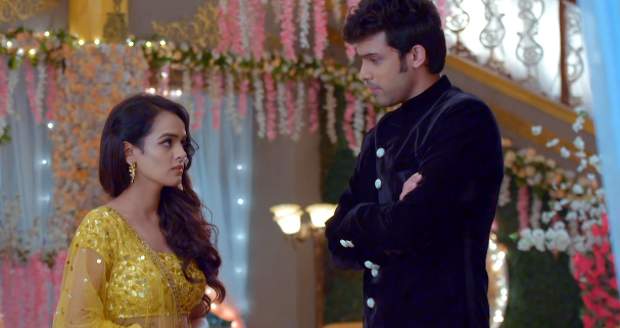 Today's KZK2 17 Aug episode starts with Prerna looking at Samidha’s photograph and missing her. Meanwhile, Samidha is fed up with hiccups and she asks Priyanka to call Prerna.

Samidha talks to Prerna and her hiccups are gone. She also tells her that she wants to talk to her about something important. Meanwhile, Kaushik calls Kukki and is not able, to tell the truth.

Kaushik asks her to wait for the college committee to find the truth and shows his trust in her. Later, the Sangeet ceremony starts and everyone prepares for it.

Anurag and Komolika arrive at the party and Komolika gets close to him on purpose to make Prerna feel jealous. Komolika also asks Anurag to act as a loving husband. He is ready to act so that Prerna hates him.

Moloy wonders if he can clear the misunderstanding between Anurag and Prerna. At the same time, Bajaj cancels his deal and informs Prerna that he is coming back Prerna asks Kukki to not tell anything to Bajaj.

Anurag finds glass with a lipstick mask and definitely knows it is of Prerna. Anurag thinks Sneha lives with Prerna and searches for her in the house. Meanwhile, Moloy and Prerna share an emotional talk and Prerna says she doesn’t have anything against him.

Veena interrupts them and takes Moloy along to talk in private. Elsewhere, Anurag apologizes to Kukki for whatever happened in college while Kukki thinks Anurag is taking revenge from Prerna.

Anurag reminds Kukki about their bond when she was a kid. He assures her that he always wishes she gets everything in life and also that she will get a clean chit.

© Copyright tellybest.com, 2018 & 2019 & 2020. All Rights Reserved. Unauthorized use and/or duplication of this material without written permission from tellybest.com is strictly prohibited.
Cached Saved on: Thursday 24th of September 2020 03:40:36 AM