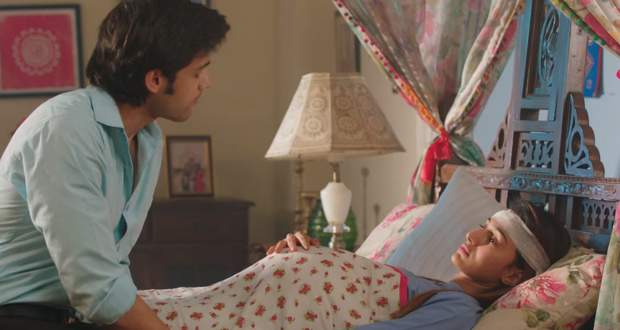 She starts crying and Anurag agrees to take her home. He takes her in his arms but is stopped by the hospital nurse. Meanwhile, Shivani sees Ronit in the hospital and gets suspicious.

Anurag returns with Prerna in the room but again brings the wheelchair to get her home. He takes Prerna in his car and says he is feeling good after doing bad also.

Dr. Rupali gets shocked that Prerna was given such a heavy dose in pregnancy. Prerna asks Anurag to never leave her while Anurag promises he will never leave her.

Anupam enquires about Anurag’s move of taking Prerna home. Anurag just wants Prerna to be safe and believes that the accident was done on purpose.

Anupam says that Prerna was also attacked before at the party. Meanwhile, Shivani is sure Ronit has done the accident and that’s why he was in the hospital.

Anupam finds the same truck near the police station while Ronit is asked for money from the truck driver. Meanwhile, Komolika asks Ronit to call the driver at the mill.

© Copyright tellybest.com, 2018 & 2019. All Rights Reserved. Unauthorized use and/or duplication of this material without written permission from tellybest.com is strictly prohibited.
Cached Saved on: Sunday 29th of March 2020 05:19:53 PM