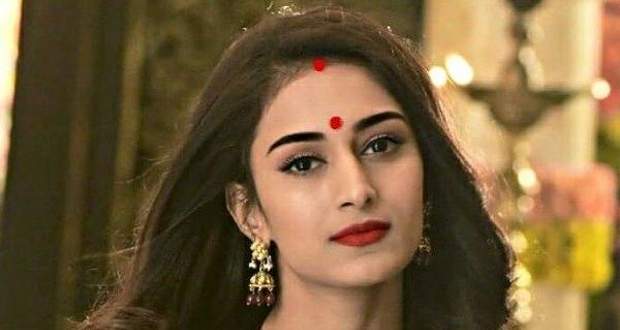 Today's KZK2 18 Jun episode starts with Prerna staring at Anurag while he enjoys the rainfall. Anurag asks Prerna to join him. The couple shares a romantic moment together.

Shivani comes to Prerna’s room and finds her lost in Anurag's dream. She wakes Prerna up from her dream. Prerna gets awkward.

Prerna calls Anurag to share her happiness with him. Anupam takes up her call. He tells Prerna that Anurag is stressed because of Mr. Bajaj.

Prerna decides to reach out to Anurag’s manager to collect some information about the thing that’s troubling Anurag.

Anurag sees the news concerning Mr. Bajaj’s takeover of the business firm forcibly. He says he will save Basu publications from Bajaj.

Veena is troubled because of the fish incident. She fails to overcome the issue. She also adds that we will not visit Basu Baadi ever. Veena pours the gangajal on herself to get rid of the curse.

Prerna tells Veena that she is unhappy because Anurag is worried. Veena advises Prerna to find the reason behind Anurag’s worry by visiting his office.

Anurag gets tensed when he learns that one of his reporters has been arrested by the cops. Prerna comes to meet Anurag in the office. Prerna calms down Anurag and also shows trust in him.

A woman tries to seduce Rishabh but he avoids showing interest in her.