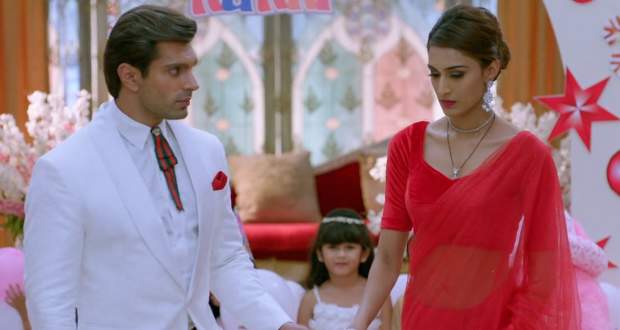 Veena confronts Prerna about Bajaj’s daughter. She is worried for her daughter carrying so many burdens of responsibilities at such a young age.

Later, Tanvi announces that Rishabh Bajaj is going to give a performance to make Cookie’s birthday party more special. Further Tanvi wishes to dance with him.

Tanvi tries to get close to Bajaj but at the same time, Cookie comes and wants her father to dance with Prerna instead.

They both start dancing while Maasiji decides to go after Veena to manipulate her. She gets rude with her and orders her about some work in the catering department.

When Veena doesn’t react, Maasiji again stops her to tell her that she is just a servant at the function and should not forget her status.

Veena says she is with Mr. Vyaas and is not getting any money from Bajaj. Maasiji decides to use Veena’s anger and attitude in breaking Bajaj and Prerna’s relation.

Meanwhile, Prerna and Bajaj start to argue over who is more arrogant in their relationship. At the same time, Maasiji tells Tanvi about her plan of using Veena.

Maasiji informs that she will cut the rope of the hanging which will fall straight on Bajaj’s head. She further feels somebody’s presence in the hallway.

© Copyright tellybest.com, 2018 & 2019. All Rights Reserved. Unauthorized use and/or duplication of this material without written permission from tellybest.com is strictly prohibited.
Cached Saved on: Tuesday 14th of July 2020 03:09:38 PM