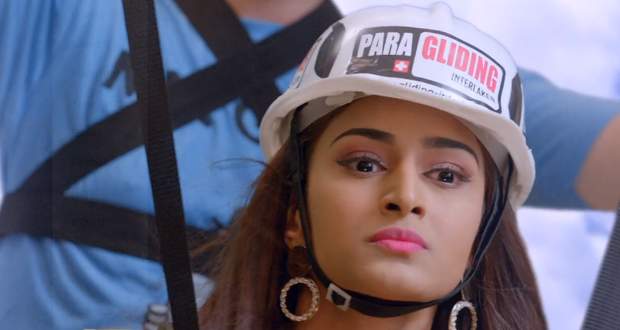 Today's KZK2 1 Aug episode starts with Anupam bringing Nivedita to a beautiful place and making her happy. Meanwhile, Prerna gets ready for paragliding and remembers her promise to Anurag.

Prerna decides to never loose from Mr. Bajaj again and Bajaj gets impressed with her guts.

At the same time, Veena is still not ready to talk to anyone and eat anything. Later, Anurag reaches Kolkata and starts imagining Prerna on the streets.

Mohini gets delighted to hear about Anurag’s arrival. She rushes to hug him but smells alcohol.

Veena visits Prerna’s room and misses her loving daughter. Shivani gets upset to see her in that condition and asks her to share her feelings.

In the morning, Bajaj and Prerna arrive in Kolkata and Bajaj learns he has to go for a wedding. Meanwhile, Anupam and Nivedita also reach Kolkata.

Mohini gets disappointed to see Nivedita and Anupam happy when Anurag is in a terrible condition. She tells them about Anurag drinking alcohol.

Anupam goes in Anurag’s room and asks him why he is drinking. Anurag says he is now planning to find Bajaj’s weakness and beat him in his game.