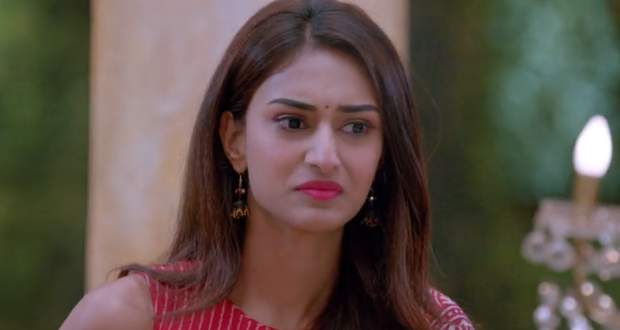 Mohini meeting her son. She assures she will get the best lawyer to get Anurag out.

Meanwhile, Veena gets to know Anurag is being charged for murder. Shivani blames herself for Ronit being after Prerna’s life.

Mohini is devastated with Anurag being in jail. She pleas Prerna to being her son back. Prerna tries to console her. She claims she has loved Anurag more than anything and will do whatever it takes to get her son back.

Veena comes to meet Anurag in Jail. Anurag assures her that he will be out within a day and will perform all wedding rituals as planned.

Anupam comes home and shocks everyone with the information of Anurag’s case being weak. Mohini gets devastated to learn this. Prerna tells everyone Mr. Bajaj is behind everything.

Mohini pleads Prerna to give Mr. Bajaj anything he desires to get Anurag out of the case. Prerna decides to go and meet Mr. Bajaj.

On the way, Prerna saves a girl and somebody is watching her all actions.

In the jail, Anurag is assured that if Prerna is with him nothing will happen.

Prerna reaches Mr. Bajaj’s house and blames him for his acts. Mr. Bajaj claims he has not complained against Anurag. Prerna demands the property papers and bail papers of Anurag.

© Copyright tellybest.com, 2018 & 2019. All Rights Reserved. Unauthorized use and/or duplication of this material without written permission from tellybest.com is strictly prohibited.
Cached Saved on: Thursday 13th of August 2020 11:23:56 PM