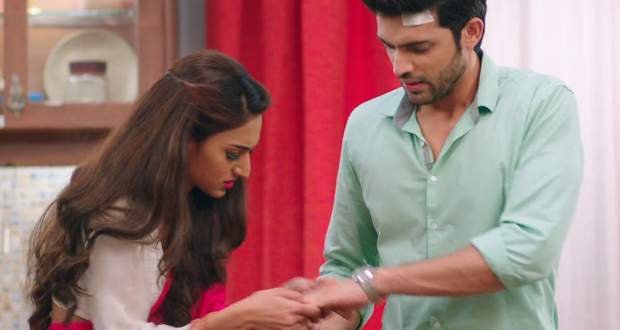 Today's KZK2 1 Oct episode starts with Bajaj revealing that he bought the police and told the inspector to arrest him. Anurag gets delighted to get the confessions from Bajaj.

Bajaj further accepts that he hates him and challenges to prove him wrong in front of Prerna. Prerna comes and hears Bajaj talking about secrets.

Anurag decides to show his real face to Prerna. He tells everything to Anupam and wishes to prove that Bajaj is wrong.

In the morning, Prerna teaches Kuki about goddess Durga and says they will bring her for 9 days. Later, Bajaj and Prerna reach Prerna’s parental home and meet everyone.

Bajaj says the situations were not right when they got married and that he should have taken permission to marry Prerna.

Anurag also arrives and wishes to drink tea made by Prerna. He further interrupts Bajaj and Prerna calls him in the Kitchen.

At the same time, Anurag’s hand gets burnt and everyone gets worried for him including Prerna. Later, Prerna enquires why Anurag is interrupting Bajaj.

Anurag reminds her how they connected on Durga Pooja last year.

Upcoming season 2 Kasauti Zindagii Ki (KZK 2) episode update: Anurag tells Bajaj that he will keep on coming back in Prerna’s life till he gets her.

© Copyright tellybest.com, 2018 & 2019. All Rights Reserved. Unauthorized use and/or duplication of this material without written permission from tellybest.com is strictly prohibited.
Cached Saved on: Thursday 30th of January 2020 06:16:26 PMCached Disp on: Thursday 20th of February 2020 06:51:58 PM