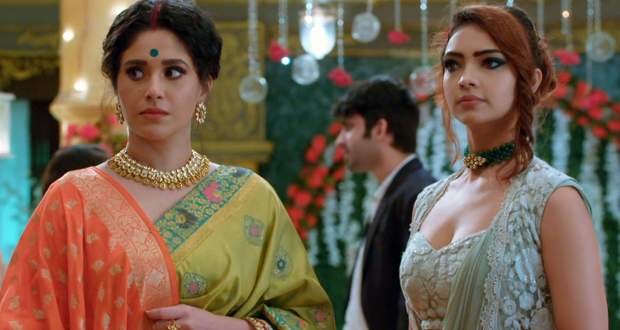 Today's KZK2 21 Jul episode starts with Nivedita complementing Komolika on her outfit. Komolika asks Mohini and Nivedita to come for the party and Mohini agrees.

Prerna is organizing the party while Veena gets impressed by Mr. Bajaj. Basu family arrives for the party while later Veena and Mohini get into an argument about their kids.

Veena doesn’t let Mohini insult her and is proud of her daughter. Prerna continues to wait for Anurag while Anurag is sitting in the bar with his friend.

Veena calls Prerna for the slide show of the Bajaj City project. Prerna is about to leave when she finds an old picture and remembers the old Anurag.

Komolika witnesses Prerna watching Anurag’s picture and wonders if they still love each other. Meanwhile, Mohini is upset that Veena could insult her.

Komolika asks Mohini to bring a drink for her and asks Nivedita to give her company. Komolika wants Nivedita to speak the truth while Nivedita is forced to act nice in front of her.

Anushka gets happy to see Kaushik at the party while Kaushik continues to stare Kukki. Elsewhere, Nivedita is not able to handle Komolika’s tantrums while Mohini taunts her for choosing a loser.

Nivedita also feels the same and thinks of getting married to Bajaj. Nivedita is sure that she can seduce Mr. Bajaj and solve their problems.