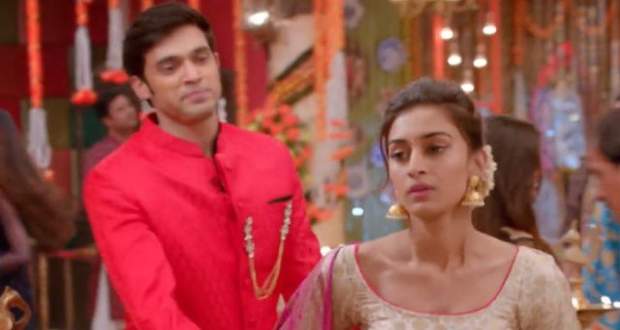 Today's KZK2 21 Jun episode starts with Mohini getting panicky when she finds her ancestral necklace missing from her cupboard. She inquires from the servants.

Nivedita, Mohini, and Anupam search through the CCTV footage of the party to learn about the culprit. They see Veena coming out of Mohini’s room.

Mohini recalls the incident and decides to search through her cupboard properly. Mohini says Veena has stolen the necklace.

Mohini gets an anxiety attack and she cries out Anurag’s name. Nivedita goes to call Anurag. Mohini reveals that she is enacting to prove Veena the culprit.

In reality, Mohini replaced the necklace and placed the ancestral necklace in Veena’s gift box. She says now she will ruin Veena’s happiness.

Nivedita comes to Anurag and asks him to come over as Mohini is getting a panic attack. Mohini tells Anurag that Veena has stolen the necklace.

Anurag fails to trust her. He says Veena can never do this as he knows the principles of the Sharma family. Mohini gets upset when Anurag fails to distrust Veena.

Nivedita says we can ask Veena once if she took the necklace by mistake. Mohini says we should call the cops.

Mr. Bajaj gets tensed when he learns that one of his records is missing from his stuff. He says now Anurag might know that his enmity with him is not just professional.