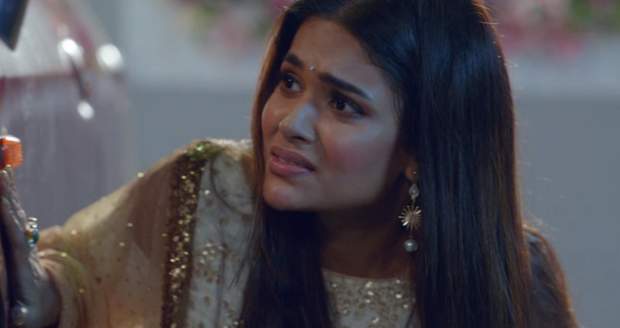 Today's KZK2 21 Nov episode starts with Prerna remembering about Komolika and her similarity with Sonalika. Later, she hides behind a pillar while Komolika leaves.

Anurag asks Prerna about her presence near the pillar and also ask about Sonalika. Prerna decides to go after Sonalika to see how she reacts.

Komolika goes in private and decides to burn the piece of clothing on which the servant’s feet touched. Prerna witnesses the same scene and gets shocked as Komolika burned the cloth in the same way.

Komolika gets shocked to see Ronit and decides to send him away. She is about to go out but Mohini and Anurag stop her. At the same time, Anurag wishes to dance with Prerna.

Anurag and Prerna start dancing while Shivani notices Sonalika does not like their closeness. Later, Komolika moves out of the party and gets mad at Ronit.

Ronit says he is there for a friend’s party and not for Shivani. Komolika wishes to kill Prerna while Shivani sees Komolika with Ronit.

Shivani hides behind the car and starts searching for Prerna to tell her the truth. Meanwhile, Anurag wishes to meet Prerna’s husband while she says he works out of Kolkata.

Ronit says he will kill Prerna while Komolika asks him to perform the action on the same day. Later, Shivani tells Prerna about Sonalika having a conversation with Ronit.