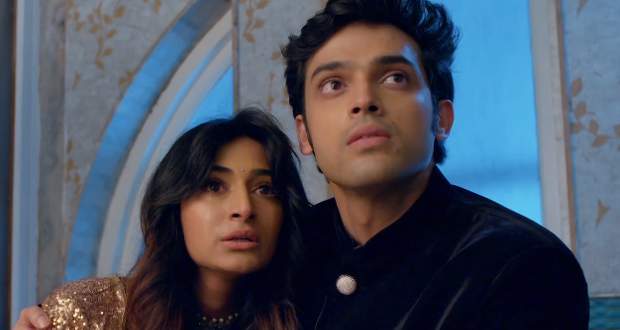 Today's KZK2 22 Aug episode starts with Komolika searching for Anurag at the party. She is excited to show him the closeness between Bajaj and Prerna.

Ronit asks the DJ to play song Ajib Daastan Hai Yeh for Shivani. Meanwhile, Prerna tries to open the door while Anurag reveals his hatred for her.

At the same time, the song plays and Anurag and Prerna remember their old loving memories. Prerna sits in the corner and starts crying. Prerna reveals her pain but Anurag is unable to understand that Sneha is not with her.

Prerna says she is alive just to take revenge from him. Anurag is unable to see her in that condition and consoles her by hugging her. Meanwhile, Nivedita tries to impress Bajaj while Komolika finds Bajaj downstairs at the party.

Komolika learns that Nivedita unlocked Bajaj out of the room and slaps her. Komolika and Nivedita go to free Prerna and find Prerna in Anurag’s arms.

Nivedita, Mohini, and Shivani also come there and get shocked. Anurag remembers Komolika’s condition of staying away from Prerna and blames Prerna for coming closer to him.

He assures Komolika that Prerna was getting close to him on purpose. Bajaj comes there and asks Anurag to leave. He further asks Shivani to go into her room.

Bajaj asks Prerna how she can be so weak in front of Anurag. Prerna tries to make Bajaj understand her emotions and is adamant to take revenge from him.