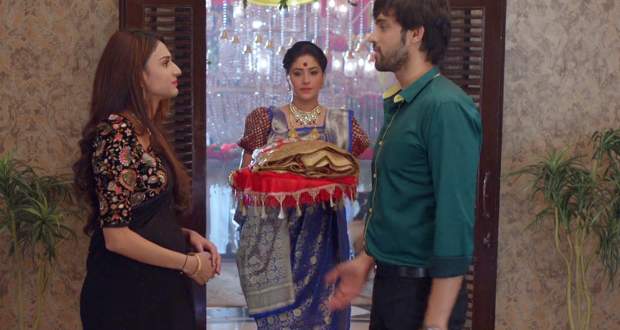 Today's KZK2 22 Oct episode starts with Anurag putting Sindoor in Prerna’s forehead in front of Goddess Durga. They both share some emotional and romantic moments.

Meanwhile, Mohini is disturbed with Moloy’s declaration and later takes out some sarees from her cupboard. At the same time, Prerna wants a proper wedding with rituals and music.

Komolika is waiting for her scar to fade away while Ronit doesn’t like her waiting for Anurag. Later, Mohini takes out a wedding outfit for Prerna.

Mohini reveals that she is doing it just for Anurag’s happiness. She catches Prerna and Anurag romancing and gives the Lehanga to Prerna.

She hugs her and Moloy also get delighted. Bajaj arrives and says he has arranged everything for Anurag and Prerna’s wedding.

Everybody starts preparing for Anurag’s wedding. Tanvi confronts Bajaj and says she told everything to Anurag about the fire accident.

Mohini is not happy with Prerna’s arrival in Anurag’s life. Meanwhile, Ronit tells Komolika about Bajaj giving divorce to Prerna.

She first gets delighted and then deduces that Prerna and Anurag might be together again. She later learns that Anurag and Prerna are getting married on the same day. She decides to stop the wedding.

Upcoming season 2 Kasauti Zindagii Ki (KZK 2) episode update: Bajaj tells Prerna that he is leaving with Kuki while Prerna tells Anurag that she is pregnant.